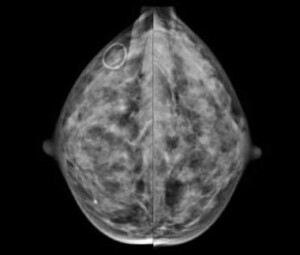 Although it's still debatable how doctors should define dense breast tissue, this study screened women with greater than 50 percent breast density. Screening ultrasound was able to detect an additional 3.4 cancers or high-risk lesions per 1000 women screened, a detection rate just under that of screening mammography alone for women with less dense breasts, according to the study.

On a mammogram, dense breasts have less fat and more connective tissue, which appears white on the mammogram, just like cancer, possibly making it easy for radiologists to miss.

The study, conducted over two years and in conjunction with seven Connecticut radiology practices, included 19,745 women who had dense breasts and "normal" mammograms. According to Dr. Sarah Steenbergen from Yale University and lead author of the study, 67 cancers were found. She also noted that sensitivity of screening breast ultrasound increased from 96.6 percent to 100 percent and in specificity from 94 percent to 96 percent over the two year period.

"We anticipate that as the number of screening breast ultrasounds increase, physicians will be even better able to differentiate benign from malignant lesions," she said.

Connecticut was the first state to pass legislation in 2009 that requires doctors to inform women of their breast density and possible risks following a mammogram, as well as the types of screening options available to them. Similar laws have been passed in Texas, Virginia, California and New York in more recent years.

Steenbergen said this study was conducted, in part, to measure the outcome of this legislation and how screening breast ultrasound can be an effective screening tool.