Q & A with Dr. Raymond Geis

Q & A with Dr. Raymond Geis 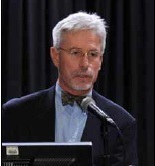 Many medical associations and societies have one-year terms in place for their leaders. The constant turnover may translate to quick changes in direction and vision. So it was refreshing to have a chance to revisit with SIIM chair Dr. Raymond Geis, who’s currently into his second (and final year) of his term. Geis recapped where he wanted to lead the society, what goals he’s accomplished and what else he still hopes to achieve.

DMBN: We had talked last year about some major initiatives you wanted to push. You wanted to make sure that great ideas in workflow improvements and efficiency were put in front of the masses. Is that still a top initiative?

Geis: It’s certainly a top initiative. We’ve probably rephrased it a little bit in that SIIM is trying to promote innovation in the IT process. We see the opportunity to use IT to vastly improve the efficiency of imaging and radiology departments.

We also have a number of young IT savvy radiologists and other physicians and IT people who have solved some of the imaging IT problems, but they need help to get their innovations into the market and we want to help them succeed — certainly in part because their innovations solve some of our issues. A good example is this year’s SIIM meeting will have both educational sessions to help people navigate the innovations process, to help them translate their research or process into something that’s available to the masses. We’re also going to have something called the “innovators alley,” where users and other innovators can network and learn from others who are further along in the process and that’s shaping up to be something pretty exciting.

DMBN: Now the innovator alley, is this the first year that it will be in place?

Geis: Last year was the first year we did it. But based on that, we’re trying to expand it. We learned from innovators last year, some of the issues they had and the things they need just in terms of education in how you go through the process of taking an idea and turning it into a product.
DMBN: With the innovator alley or just the idea in general of turning something into a product, are there companies that work with SIIM to develop ideas of the members or do you give members the background and tools to seek them out?

Geis: In general, we give innovators tools to seek those people out. We do see that some of those companies are at the meeting and watching for things and are curious about where the next great thing is going to come from. And SIIM certainly is positioned uniquely among imaging IT societies to be at the front at where things are showing up first. But we don’t have a specific group of people that show up constantly to look at the new innovations.
1(current)
2
3