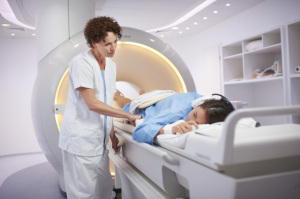 Israeli firm InSightec, which is partly owned by General Electric Co., is nearing a milestone. At the time of this writing, a counter on the privately held company’s website read 9,587. These are the number of women, to date, who have had their uterine fibroids, painful non-cancerous growths in the uterus, burned away by the manufacturer’s MR-guided High Intensity Focused Ultrasound system, known as ExAblate. Well before the year is out, InSightec’s global patient base should pass 10,000.

Whether or not champagne corks pop at the company’s Tirat Carmel headquarters when that happens, research is underway for new applications for the technology, from treating cancer to neurological disorders. InSightec’s rival, Philips Healthcare, is also amassing evidence for its own MR-guided HIFU system, the Sonalleve. Although the system is not available yet in the United States, Philips is running a pivotal trial on the treatment of uterine fibroid with the device, which it hopes to wrap up by spring of 2016, according to the clinicaltrials.gov page documenting it.

Although ultrasound (and not MR)-guided HIFU treatments for cancer, particularly prostate cancer, have attracted some controversy, researchers are pushing for new studies. This spring, a new journal formed to publish results from HIFU therapies, the Journal of Therapeutic Ultrasound, backed by the Focused Ultrasound Foundation, a society whose board includes a rather surprising mix of names from outside medicine, from former “junk bond king” Michael Milken to best-selling author John Grisham.

It’s not just HIFU that’s attracting attention. Researchers are looking at another ultrasound technique to turn sound waves into an incision-less scalpel, allowing, in effect, a kind of surgery without breaking the skin.

“It’s a platform and a modality that I believe is going to be around for a long time, and along with HIFU, a lead modality for noninvasive surgery,” says Tom Davison, CEO of the startup HistoSonics that’s working on the technology. But whether MR-HIFU, or HistoSonics’ product, gain their lead status will depend greatly on the results of a range of clinical studies going on now or slated for the near future.

HIFU works by using ultrasound transducers to concentrate acoustic energy on a target to raise its temperature, much like how a magnifying glass can focus the sun’s rays to scorch grass or hapless bugs. As its name suggests, MR-HIFU uses real-time MR imaging to help doctors guide HIFU procedures.
1(current)
2
3
4

Where is mobile imaging heading next?