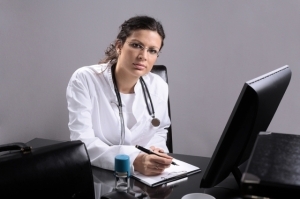 Even in one of society's most respected fields, women still suffer from a gender-based income gap. A 25.3 percent earnings difference remains between male and female doctors, even as women now make up 33 percent of all physicians, according to a new research letter published in JAMA.

The study looked at U.S. Census data from 1987-1990, from 1996-2000, and from 2006-2010. It found no statistically significant improvement over time in the earnings of female physicians compared with male physicians.

Previous papers accounted for differences in physician specialties, such as surgery — more male dominated — or primary care — more female dominated — to account for some nuances in income. This latest paper was not able to include those factors, which its authors say may be a good thing.

"Comparing differences between male and female physicians within specialties is an informative comparison to make, but it might be misleading," study co-author Anapam Jena, assistant professor of health care policy and medicine at Harvard Medical School, told DOTmed News. "If women are in lower paying specialties and that's not a choice that they're making with an equal set of opportunities, then that suggests that there may be some space for improvement in terms of access to being able to work in higher paying specialties."

The only area in health care where the income gap has shrunk is for health care executives, the study found. Female dentists experience the largest income gap, earning an average of 40 percent less than their male counterparts.

In the nurse practitioner field, where women make up the vast majority, the income gap is smallest, at 5.6 percent.

Outside of health care, where women earn 19 percent less than men, women make up around 50 percent of the workforce.

"I think the solution in part is already in the works," said Jena. "The choices and the access are better than it was 20 years ago, but our study at least raises some questions about whether or not access is full at this point."