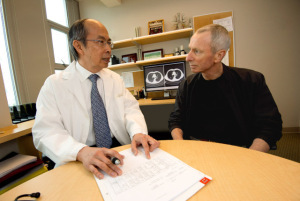 Dr. Stephen Lam and study participant
Chris Douglas view and discuss CT scans.
(Credit: BC Cancer Agency)
A new clinical tool may make CT scans for those at high-risk of developing lung cancer even more useful. Risk calculator software designed by investigators from the Terry Fox Research Institute can accurately classify whether spots or lesions are benign or malignant on a CT scan nine out of 10 times, making it the most accurate tool available.

The software is already in use in Vancouver, where it was developed, and its creators hope it will soon be incorporated into practice around the world.

Unlike previous tools, the new software looks at signs besides nodule size to determine malignancy, including older age, female sex, family history of lung cancer, shape of the nodule and location of the nodule.

"We found that 20 percent of the cancers did not develop from the largest nodule," co-principal investigator Dr. Stephen Lam told DOTmed News. "This is more of a refined guideline that can potentially reduce the number of repeat CT scans, biopsies and even surgeries."

For example, researchers found that nodule location in the upper lobes of the lung had an increased probability of being cancer regardless of size.

The research team observed a total of 12,029 lung cancer nodules on CT scans from 2,961 current and former smokers, aged 50 to 75. Participants in the data used were followed for an average of three years, or an average of eight-and-a-half years, depending on the duration of the original study.

The tool's announcement arrives soon after the U.S. Preventive Services Task Force made a recommendation in favor of annual CT screenings for high-risk lung cancer patients.

"[Dr. Lam and colleagues] provide a tool to grapple with the problem of the high rate of positive low-dose computed tomography scans," said Dr. Christine Berg, co-principal investigator of the National Lung Screening Trial, in a release. "Coupled with continued public health efforts to lower cigarette smoking, this work will have international impact on the leading cause of cancer death worldwide."