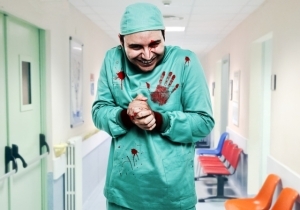 Forget Freddy Kreuger. Medical professionals have committed some terrifying crimes, from accidental dismemberment to serial murder to attempted nasal polyp theft. While some of these "medical errors" were in fact accidental and led to better care, others were simply sinister. Know a disturbing mis-deed we skipped? Let us know in the comments.

The killer will see you now
Did you know that the most prolific serial killer in history was a physician? It's estimated that British physician Harold Shipman may have killed up to 400 of his patients over the course of 24 years. He routinely forged prescriptions and gave patients overdoses on drugs like morphine, hiding his crimes by manipulating the patients' medical records to read that healthy patients were very ill before their deaths. Medical examiners and funeral directors were suspicious, but it wasn't until one of his patients left him $386,000 in her will that police intervened. Coroners discovered that the woman died from a morphine overdose, and her will was linked to Shipman's typewriter. In 2000, Shipman was convicted of 15 murders and sentenced to life in prison for each. He hanged himself in prison in 2004.

Mis-labeling leads to mayhem
In 2007, when Bill crashed his car into a tree, crushing both legs, doctors saw that his right leg could be saved but his left was a lost cause. When an X-ray technician mislabeled the studies, the orthopedic surgeon amputated Bill's right leg instead of the left. Though it was too late for Bill, after the incident, the Joint Commission made preventing wrong-site surgery one of its main safety goals, and establishing protocols became an accreditation requirement for hospitals. Unfortunately, studies show that wrong side surgery still occurs about 40 times a week nationwide.

Angel of death
Night shift nurse Richard Angelo had a passion for being a hero to sick patients — after he intentionally poisoned them. The murderous nurse worked late at Good Samaritan Hospital in New York, where he caused the deaths of 24 patients after injecting them with Pavulon and Anectine. Though his defense team said his actions were the result of multiple personality disorder, in 1987, Angelo was convicted and sentenced to 61 years to life in prison.

Clinical drug trial gone awry
In 2006, Parexal International sent out text messages to young men in Britain asking for healthy volunteers for a paid clinical trial. Within minutes of trying the drug, the volunteers were struck with nausea, pain and chills, and were told they were seriously ill. Two were told they might die. And though all of the participants eventually recovered, their immune systems were compromised, and doctors are still unsure of their future health. Compensation for drug trials in Britain is set by the national insurance plan at 30,000 to 40,000 Pounds, but that will likely not be enough to cover a lifetime of complications.
1(current)
2