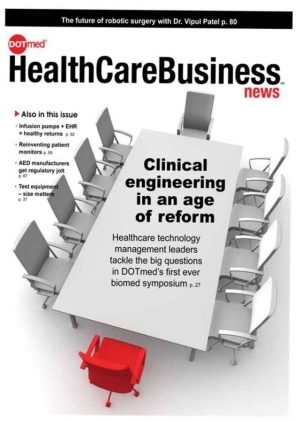 For the past few years, we've held a press briefing at RSNA to review the major stories of the last year and make predictions about the stories we think will be in the news in the upcoming year.

This year, the room was filled with a little over 150 people. Mostly contributing writers, marketing, communications, public relations and media professionals, as well as some of our important advertisers.

This year, we made a major announcement about DOTmed's news operation: We are changing the name of our magazine.

Effective in the January issue, our magazine will be named "DOTmed Healthcare Business News."

Over the last three to four years, our news content has changed because the people reading our online news and magazine has changed. We have more health care providers reading the news and as a result, we have changed our content. We feel, as do many of the people we met with at RSNA, that healthcare business news better describes what we do.

This is a big announcement for us and it marks a major milestone in our evolution.

In other news, the RSNA show was a big hit this year. I don't have exact attendance figures, but I know personally that a lot of the people who I have come to know over the years have not attended the RSNA in the last few years but this year, almost all of them showed up. I saw people I have not seen in years and to me, that is just another sign that the economy is changing in a positive way.

If you would like to see a page outlining the history of DOTmed's corporate evolution, click here.