Ultrasound equivalent to CT in detecting appendicitis in kids 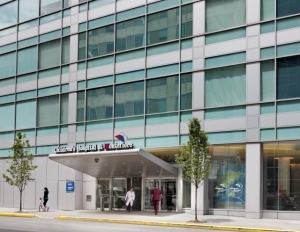 (Courtesy
Children's Hosptial at Montefiore)
There has been a lingering fear about the radiation CT emits — especially for children. But the Children's Hospital at Montefiore in New York City is pretty confident they have found a safe alternative. Investigators at the hospital conducted a study that proves that using ultrasound, which emits no radiation, instead of CT to detect appendicitis in children produces comparable results to CT and does not increase hospital length of stay.

"We've shown that even the additional time and the additional step, putting the ultrasound into the pathway of treatment, does not cause any effects of worsening the course of the appendicitis," Dr. Meir Scheinfeld, director of the Division of Emergency Radiology in the Department of Radiology at Montefiore Medical Center, told DOTmed News.

CT has been the most frequently used imaging technique to detect appendicitis because of how sensitive it is. However, the advanced imaging technique exposes patients to upward of 25 millisieverts a scan — about eight times the average annual dose from naturally occurring background radiation. As a result, some doctors are interested in radiation-free alternatives for children, such as ultrasound, as kids are at higher risk for radiation-induced cancers than adults.

From 2005 to 2011, the Children's Hospital at Montefiore gathered up and looked at the medical records of 804 pediatric patients. The radiologists and clinicians in the divisions of pediatric surgery and emergency medicine started out by increasing the use of ultrasound as the first imaging technique from 33 percent at the start of the study to 90 percent at the end of it. During the same time, they decreased the use of CT as the first and only diagnostic test from 43 percent to less than 10 percent.

"The conclusion of the paper is that despite us making this change, doing ultrasound before CT in patients, still there was no detrimental effect on patient length of stay or complicated appendicitis during the study," said Scheinfeld.

Appendicitis, or inflammation of the appendix, is the most common childhood surgical emergency in the United States and its rate is continuing to increase.

"Although I truly believe that we should use radiation as little as possible and use ultrasound MRI whenever possible, CT is used because it is so amazing," said Scheinfeld. "You can evaluate the entire abdomen and pelvis with a CT scanner within a few seconds."

"We should try to reduce medical radiation regardless of whether it causes cancer or not, there's a risk and if the amount of risk is uncertain we should reduce it," he said.

Clinicians in the Division of Pediatric Radiology at the hospital have made it their mission to raise awareness of radiation protection and lower CT scan radiation dose when imaging children. Scheinfeld said their primary level of education and collaboration is with clinicians who are working to diagnose their patients.

"In the past, where the question was appendicitis or not we would encourage them to get the ultrasound first and they have gone along with it," said Scheinfeld.