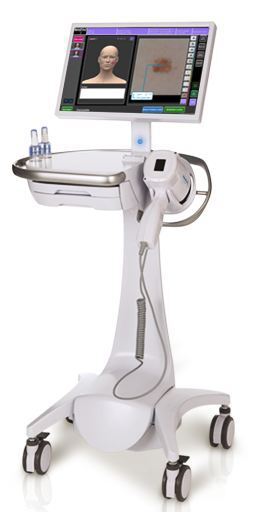 MelaFind device
(Courtesy of MELA Sciences)
For a long time dermatologists would use their eyes and a magnifier to examine a suspicious lesion for melanoma. But that's becoming a thing of the past. Now, physicians have the option of using high-tech handheld melanoma scanners to determine if those lesions require a biopsy.

In late 2011, the Food and Drug Administration approved a handheld melanoma scanner created by MELA Sciences called MelaFind for sale in the U.S. and it opened dermatologists up to a whole new world. Instead of relying solely on their own eyes and a low-tech magnifier, it allowed them to utilize a device that uses 10 different wavelengths of light to see up to 2.5 millimeters below the skin and obtain images of the different layers.

"What MelaFind does is take the experience of thousands of physicians looking at that same lesion, plus being able to look at that lesion below the surface," Chris Butler, former vice president of operations for MELA Sciences, told DOTmed News. "Statistically, there's a much better chance at getting the diagnosis correct, as opposed to one person with a limited amount of lesion experience."

First, the illuminator shines the light of 10 differing wavelengths from blue to almost infrared to capture the data. Next, the photon sensor transforms the scattered light particles into electrons to be analyzed. MelaFind then obtains multi-spectral digital data from below the surface of the skin. Finally, computer algorithms determine if the lesion may or may not be melanoma.

The journey MELA Sciences took for FDA approval was not an easy one. "It was one of those things where it was a very, very controversial device and controversial because it was breaking new ground touching on saying to a physician, 'We might be able to see this, maybe as good as you, maybe better than you'," said Butler.

In 2006, they put together an early version of the device and set up trials in the U.S., Europe and other areas. It was one of the largest prospective clinical studies done in that area, with over 100,000 lesions evaluated and 1,000 diagnosed as melanoma. The board reviewed the results and decided that the device was fit to be approved.

"That was absolutely the crowning glory, it was a very, very hard and long road to get to that," said Butler.
1(current)
2