Checking in with the first installed MEVION S250 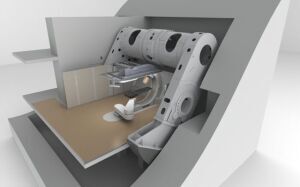 Photo courtesy of Mevion
DOTmed caught up with Mevion at ASTRO and inquired about any recent news regarding the MEVION S250; their groundbreaking compact proton therapy modality. They informed us of several systems in construction, and suggested we reach out to Dr. Eric E. Klein, chief of proton therapy physics at the S. Lee Kling Center for Proton Therapy in St. Louis, MO. He gave us an insider's account of what the first nine months treating patients with the MEVION S250 has looked like.

According to Klein, things were a little bumpy in the beginning. As they started ramping up their clientele, particularly in February through April, there were unforeseen complications that lowered the system's uptime to around 80 percent. "A few changes were made both organizationally and in terms of understanding the system," said Klein, "and since then we've been up around 96 or 97 percent of the time."

One major benefit Klein has discovered with the single room system is that it resides alongside the rest of the hospital. Larger proton therapy centers have to be installed in remote locations, sometimes miles away from the clinics they are associated with. At Klein's hospital, they actually installed the MEVION S250 in the basement of their parking lot. "It sounds crude but it was truly brilliant," laughed Klein, "because it had the right space and support system already built in. It was very straightforward."

In the event of a system breakdown, which Klein said is very rare, linear accelerators in the facility represent an alternative for patients who cannot wait for treatment. With the big proton centers, due to lack of other resources, Klein said a broken down machine may result in a procedure being cancelled entirely.

Another advantage of a single room system is that you don't have an engineer orchestrating therapy for multiple rooms at a time, which Klein said may lead to problems with workflow, where one room is receiving beam and another has to wait. With the MEVION S250, operations are more hands-on. "They don't have to communicate with an engineer to get beam, they literally turn a key and in five seconds a light comes on and they push a button," said Klein.

He also says that while other compact modalities claim to be single room, they do require additional rooms to house the cyclotron and the beam transport. "With Mevion's system, the accelerator is small enough and light enough that it is attached to the gantry," said Klein. That means the room size is comparable to that of a traditional linear accelerator.
1(current)
2