Are anticoagulants the best choice in hip and knee replacement procedures? 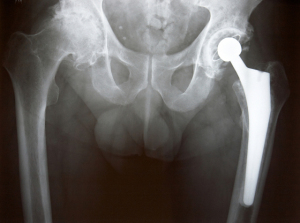 Hip and knee replacements carry a risk of deep venous thrombosis or pulmonary embolism — blood clots that can prove life-threatening.

Current pharmacological protocols for prophylaxis include blood-thinning anticoagulants, but these can cause complications.

However, it may be that mobile compression devices can yield comparable results with fewer side effects, according to a Shiley Center for Orthopaedic Research and Education at Scripps Clinic study, published in the February issue of the Journal of Bone and Joint Surgery.

In a video recorded at the Current Concepts in Joint Replacement winter meeting in Orlando, Fla., earlier this month, Dr. Robert L. Barrack shared his perspective on the study's findings.

"Using a mobile compression device with monitoring chip we were able to achieve a similar level of efficacy in preventing venous thromboembolism as with virtually all of the approved, potent anticoagulants but with a much lower complication rate; no bleeding complications," said Barrack.

The study looked at the outcomes obtained using the ActiveCare+S.F.T. mobile compression device.

The results from its use proved comparable to anticoagulant use and had fewer side effects. Researchers in the study have suggested that it may represent a better way of doing hip and knee replacements.

The study, led by Dr. Clifford Colwell, compiled a registry of patients who had received primary knee arthroplasty or hip arthroplasty with the compression device at ten different facilities. Roughly half of them had hip replacements and the other half had knee replacements. Out of 3060 total patients, only 28 had venous thromboembolism; less than one percent.

Barrack said stronger anticoagulants should be used selectively, and reserved for patients who are at higher than average risk for blood clots, or have had a history of clots.

In an email to DOTmed News, Barrack said other studies show the most common reasons for a patient to be readmitted to the hospital are bleeding and wound drainage, which are complications most commonly associated with the use of anticoagulants.

The ActiveCare+S.F.T. is manufactured by MCS, a medical device company based out of Israel, and is currently being used in over 80 surgical centers across the U.S.