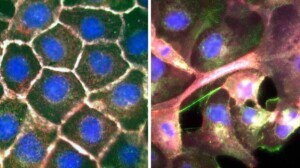 Normal cells (left) compared
to broken down (right).
Photo credit: Vaughan et al.
Cell Reports
Severed proteins are behind the spread of lung cancer cells in the body, dramatic new images have revealed. The research was performed by scientists at the Cancer Research UK Manchester Institute.

Cancer causes a breakdown in the protein that holds lung cells together. This, in turn, allows the cancer to spread.

The binding is controlled by the protein TIAM1. In normal cells, any excess of this substance is recycled, but in cancerous cells the recycling rate is too high, leading to an abundance of broken ties. The process seen in the images is like "hijacking cells' recycling process and sending it into overdrive," said Cancer Research UK's Dr. Angeliki Malliri, lead researcher of the study.

It was already known that TIAM1 played a role in binding together epithelial tissue cells. The researchers built on that knowledge by identifying the proteins with which TIAM1 interacts to better understand how it keeps the cells connected together.

"We found that the HUWE protein was involved and then decided to look into lung cancer because it's known that HUWE is up-regulated in this cancer," said Malliri in an e-mail to DOTmed News.

Malliri said that the research, which was published in the journal Cell Reports, won't play a role in preventing the development of lung cancer but may one day be able to help prevent lung cancer from spreading to other regions.

"The next step is to see how TIAM1 and HUWE work together in animals and then people. If they work in the same way in the body, it might be possible to stop cancer from spreading by using HUWE inhibitors to stop TIAM1 being chopped up so that the cells stay anchored together and cannot spread," said Malliri, "However there is still a lot of research needed before this reaches the clinic phase, which could take a number of years."

The researchers are hopeful that future research may show that TIAM1 and HUWE could be implicated in other types of carcinomas, including those of the skin, breast, prostate, as well as colorectal cancers.