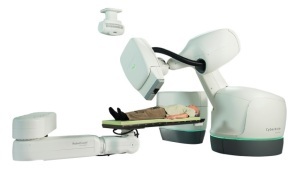 Accuray's CyberKnife M6
A Texas woman suffering from trigeminal neuralgia (TN) to such a degree that she had been reduced to walking with a cane and walker had her agonizing facial pain successfully treated in an unusual second procedure with a CyberKnife.

While the first line of treatment for TN is medications, there are cases in which patients do not respond. This woman, 70, had been initially treated with the Gamma Knife, which had brought her relief.

But her excruciating facial pain returned within 3.5 years.

Then came the second successful effort, Dr. Stephen Brown, the treating radiation oncologist at Austin CyberKnife, in Texas, told DOTmed news. He added that the procedure requires a particularly high level of precision.

While he noted that traditionally a Gamma Knife has been used, there are reasons that CyberKnife is gaining ground in the treatment of TN. In fact, he now thinks it may be capable of superior results.

"[This patient] was originally treated for the condition back in March of 2007 with the Gamma Knife system," said Brown. He explained that after one procedure, normally you would not perform a second treatment with a Gamma Knife – in part due to the need for a head frame.

In addition, he noted, "there's always potential risk of damage to the brain stem," from the secondary SRS treatment. "You could cause permanent numbness in the face, and there are other cranial nerves around the trigeminal that could be damaged as well."

Brown said that the targets are different from Gamma Knife to CyberKnife. "With Gamma Knife we treat a point on the [trigeminal nerve]," said Brown. The nerve itself is typically 1 mm by 7 mm. "With CyberKnife we're targeting a length of the nerve, 1mm by 5 mm or 6 mm, and we think the impressive early and long-term responses we're seeing are due to treating a larger length of the actual nerve sheath."

"TN is a devastating problem for people diagnosed with it," said Brown, whose patients will often have undergone unnecessary dental procedures – such as root canals and tooth extractions – before being guided toward the correct diagnosis of the rare and painful condition.

After Brown discussed with the patient such issues and the risks and potential benefits of a second treatment with a CyberKnife, which is frameless, she agreed to the procedure.

Thus far, he revealed, his patient has made a remarkable recovery. In a press release, she said she has regained her balance and rediscovered joy that TN had taken away from her everyday life.