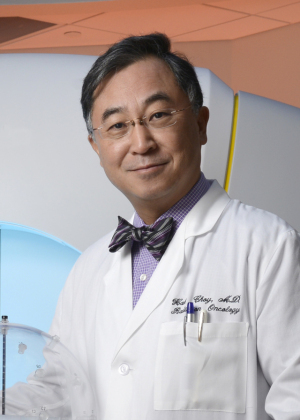 Dr. Hak Choy
chair and professor
department of radiology
UT Southwestern Medical Center
Plans are now underway in Texas to build a center for a cancer treatment that may give better outcomes than proton therapy – using heavy ion radiation.

At present there are just eight facilities worldwide that provide this form of care. None of them are in the U.S., but that may soon change.

His facility has received a $1 million planning grant from the National Cancer Institute to start laying out research proposals for the National Center for Heavy Ion Radiation Therapy.

Once clinical trials outline the benefits of the treatment, "U.S. patients can be offered the best radiation therapy tool available on the planet," says Pompos.

Pompos and his colleagues, led by Dr. Hak Choy, chair and professor of the UTSW department of radiation oncology, formed a consortium with other Texas-based parties, including MD Anderson and NASA, in the interest of receiving the preliminary planning grants.

Part of the reason heavy ion radiation therapy is not yet a reality in the U.S. has to do with payment issues. "There is not a reimbursement model for carbon therapy in the U.S. and without government funds, the health care systems are not willing to invest in a carbon facility," said Choy in an e-mail to DOTmed News, "Almost all the international carbon facilities were built with government support.

In addition to the eight fully-operational heavy ion radiation therapy centers in the world, there are now ten more in development. Although the U.S. pioneered the treatment in 1954 at the Lawrence Berkeley National Laboratory (LBNL), that program closed down in 1993.

Since then, the ability to deliver irradiation with spot scanning and sub-millimeter precision have contributed to the efficacy of heavy ion, said Pompos.

Beyond that, "the world is mainly using carbon ions these days, which have less toxicity due to their biological effectiveness," said Pompos, "Unlike LBNL, which used neon ions."

"The efficacy of heavy ion radiation therapy for certain cancers has already been established by foreign institutions, which have conducted clinical trials and found profound increases in overall disease-free survival," said Choy.

Although very optimistic, Choy, Pompos, and their colleagues, recognize the need to take a scientific approach to researching the treatment. Establishing a domestic research facility is a fundamental step toward realizing that goal.

In the U.S. more than 50 percent of cancer patients currently receive energetic photons, electrons, or protons, as part of their treatment. Heavy ion could mean a new standard for dose conformation with a strength that could even treat normally radio-resistant tumors.

The National Center for Heavy Ion Radiation Therapy is projected to be completed in 2021, at a total building cost of $200 to $250 million.