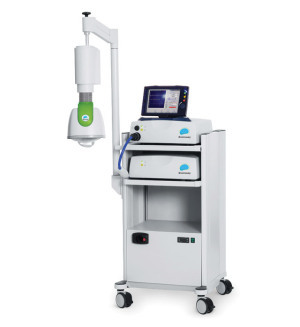 Brainsway's Deep TMS system
Ronda, a former special education teacher in Nebraska, battled major depressive disorder (MDD) for 10 years, and medication provided her no relief. Her physician, Dr. Walter Duffy of Premier Psychiatric Group, decided to have her undergo a new treatment called Deep Transcranial Magnetic Stimulation (TMS) and in just a week she noticed a dramatic change in her symptoms.

The technology was developed by an Israel-based company called Brainsway, and its new U.S. branch, Brainsway USA Inc., recently launched the device in the U.S. During the treatment, a helmet is placed on the patient’s head that generates magnetic fields, similar to those used in MRI scanners, and momentarily stimulates the targeted brain area.

Major depression is one of the most common mental disorders in the U.S., according to the National Institute of Mental Health. In 2012, about 16 million adults ages 18 and older had at least one depressive episode in the past year, which represented 6.9 percent of all adults in the U.S.

The Deep TMS treatment involves 20-minute daily outpatient sessions for four to six weeks. The patients remain awake and alert throughout the procedure and they can resume their daily routines immediately thereafter.

A multi-center, randomized study that included over 200 patients was recently published in the journal World Psychiatry and found that Deep TMS is an effective and non-invasive treatment for patients with MDD who had no response or could not tolerate antidepressant medications.

An older study conducted last year by Douglas Mental Health Institute of McGill University found that more than 70 percent of the patients who underwent Deep TMS had a “significant response” to it and 40 percent experienced full remission.

Deep TMS has FDA clearance to treat depressive episodes in adult patients who suffer from MDD and have not experienced satisfactory improvement from antidepressant medication treatment. The treatment is also being evaluated for FDA clearance for other conditions including post-traumatic stress disorder, bipolar disorder, obsessive-compulsive disorder and Parkinson’s disease.