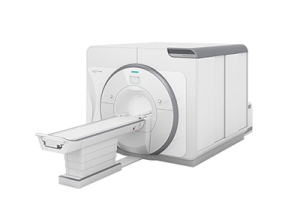 The 7T systems have higher signal-to-noise and contrast-to-noise ratios compared to lower field systems, according to research published in the European Journal of Radiology. The 7T magnet generates high resolution, contrast-rich images for a variety of conditions including multiple sclerosis, brain tumors, aging-related changes and cerebrovascular diseases.

Siemens claims that the Magnetom Terra is the world’s first 7T scanner designed for clinical use. It features up to eight-channel parallel transmit technology for selective excitation and higher homogeneity for challenging body regions including cardiac and abdominal, and up to 64 receive channels for higher coil density in the field-of-view.

It also features Dual Mode technology, which allows the users to go from research modes to clinical protocols in under 10 minutes. Just like Siemens' 3T systems, Magnetom Terra is built on the company's latest software platform, syngo MR E11.

The Magnetom Terra is 50 percent lighter than previous actively shielded 7T magnet generations. Siemens was able to achieve that through a multi-year engineering project at Siemens Magnet Technologies in Oxford.

Over 65 percent of 7T MRIs deployed around the world are Siemens systems and six of the leading U.S. hospitals use their 7T MRI technology, according to Siemens. In addition, 64 percent of the International Society for Magnetic Resonance in Medicine abstracts were based on data from Siemens ultra-high-field systems like the Magnetom Terra.

Philips Healthcare and GE Healthcare also have 7T MRI systems, but for research purposes only — Philips’ is called the Achieva 7.0T MR research system and GE’s is the Discovery MR950. In 2012, only about 40 7T MRIs were installed worldwide — Siemens installed almost 15 in the U.S., Philips installed nine and GE installed seven in a few countries.

DOTmed News spoke with Dr. Siegfried Trattnig, founder and chairman of the MR Center of Excellence in Vienna, back in February and he said 7T is the ideal magnet strength for conducting MRI tests. He estimates that within the next five years, 7T MRI will become the standard of care for neurological and muskuloskeletal MRI applications.