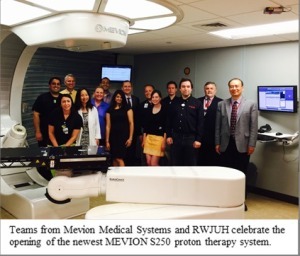 Teams from Mevion and RWJUH
celebrate the opening
Mevion Medical Systems, the proton therapy company that makes the MEVION S250, has set out to challenge the widely-held notion that bringing proton therapy to a hospital requires the kind of time, space, and money that is reserved for a select few.

In late April, the company became the first to bring proton therapy to a physician-owned practice. In a testament to its success, that facility, the Ackerman Cancer Center, is currently treating 24 patients per day.

By announcing yet another facility opening, this one at Robert Wood Johnson University Hospital (RWJUH) in New Brunswick, New Jersey, Mevion is showing that proton centers can pop up today faster than ever before.

"Opening back-to-back proton therapy facilities in less than a month is a testament to the significant value the MEVION S250 provides to cancer centers: high-quality, leading-edge treatment in a fraction of the time and at a fraction of the cost of other systems on the market" said Joseph K. Jachinowski, CEO of Mevion, in a statement.

Jachinowski went on to credit the expert Mevion teams that build, install and support the systems.

Mevion counts itself among a new kind of proton therapy manufacturer that is moving away from the hundred million dollar, football-field-sized, facilities that one traditionally thinks of with proton therapy. The company — as well as its smaller footprint competitors ‐ hope to create better access to the treatment. If more patients receive proton therapy, more evidence may accumulate to recommend it, and insurers will have evidence to support better reimbursement.

In total, there are now three MEVION S250's in operation. The third is at S. Lee Kling in Missouri, where treatments have been underway for over a year now.