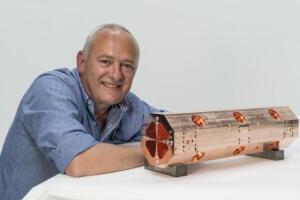 Serge Mathot of the CERN
engineering department with
first of the four modules
that will make up the
miniature accelerator.
(Maximilien Brice/CERN)
Housed in a tunnel 17 miles in circumference and as deep as 574 feet underground, the Large Hadron Collider (LHC) is significantly bigger than any hospital, but facilities will soon be able to harness its power — in a much smaller package.

Scientists at the European Organization for Nuclear Research (CERN), which built the LHC in collaboration with thousands of scientists and engineers around the world, have used the same technology to create what they’ve called a miniature linear accelerator, or mini-Linac, designed to be used in hospitals for cancer treatment and to produce radioisotopes for imaging.

It will be the first portable accelerator, the team of scientists at CERN, which is based in Meyrin, Switzerland, told HCB News via email.

The mini-Linac is made up of four modules that are each roughly 20 inches long, for a total package of a little more than 6.5 feet. Only one module has been constructed, though the scientists say that it is enough to validate the concept.

To develop the mini-Linac, the scientists had to double the operating frequency used for the radiofrequency quadrupole (RFQ), a linear accelerator component used in the acceleration of low-velocity ion beams. With the higher frequency, the accelerator can be more compact.

The device, the scientists said, is designed to produce low-intensity beams of charged particles, which can be used in a form of radiation therapy called hadrontherapy, which better targets tumors with less damage to the surrounding, healthy tissue. The device can also be used for the production of radioisotopes used for PET exams and could produce alpha emitters for brachytherapy, a common treatment for prostate cancer.

Being able to produce isotopes on site means that radioactive materials will no longer need to be transported and that a wider range of isotopes can be produced.

The high frequency RFQ for hadron therapy will be completed at the beginning of 2016, the scientists said. They have signed an agreement with an outside company to connect the RFQ to a linear accelerator and perform the first tests with the beam by the end of 2016.