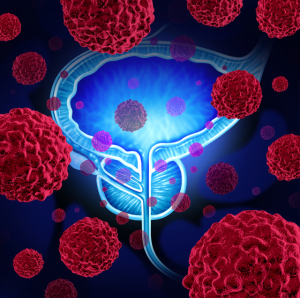 Researchers have discovered that PET imaging with a specific biomarker can detect a fast-growing primary prostate cancer and is better able to differentiate it from benign prostate lesions, a process that they hope could eventually replace the traditional ultrasound-guided 12-core biopsy.

The study, published in the July 2015 issue of The Journal of Nuclear Medicine, looked at 13 patients with primary prostate cancer who underwent PET imaging with F-18 DCFBC PET, using a low-molecular weight radiotracer that targets the prostate-specific membrane antigen (PSMA), which is associated with a more aggressive form of the disease. A dozen of those patients also had a pelvic prostate MR scan.

While MR was more sensitive than PET imaging in detecting primary prostate cancer, the PET picked out the lesions that were the most clinically significant, with a Gleason score of 8 and 9, and greater than 1 milliliter in size. The researchers compared the two types of scans by looking at 12 segments of the prostate and also at dominant lesions.

Dr. Steve Cho, an associate professor at the University of Wisconsin School of Medicine and Public Health, and senior corresponding author of the study, said the prostate is a difficult organ to image, and while MR is a good modality, it is not as specific as it could be.

“MR is not able to differentiate benign processes from prostate cancer itself,” Cho told HCB News. “The PET will allow pretty high confidence in the detection. If something is positive on PET and MR, it will allow for greater confidence and specificity.”

The specific radiotracer used in the study is better at detecting cancers with a higher Gleason score, meaning cancers that are more aggressive, according to Cho. Other PSMA-based PET agents have been introduced for prostate cancer imaging, and some have better sensitivity than the 18F-DCFBC PET radiotracer, which Cho said “further validates that this is a good strategy.”

“The next-generation trials will have sensitivity that will be comparable to MR, but the specificity will allow us to be more confident,” Cho said.

Currently, physicians diagnose prostate cancer by conducting a biopsy, usually when something is detected during a physical exam or after a prostate-specific antigen (PSA) blood test comes back positive. Some physicians still may be concerned even if a biopsy comes back negative for prostate cancer and the 12-core biopsy might not pick area with the most aggressive cancer, Cho said.

“Down the road, potentially this may help to direct biopsies in patients with a higher risk up front, potentially replacing the 12-core (biopsy), but it still needs validation,” Cho said. “If it’s validated down the road, it leads to the hope that this could replace these biopsies.”