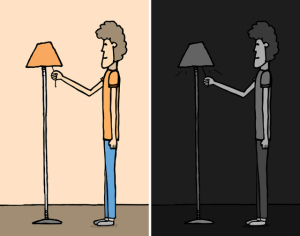 Could this mean lights-out
for cancer?
Just as you would flip a switch to turn off a light, a new discovery by Mayo Clinic scientists may point the way to shutting off the growth of cancer cells.

“We found that an adhesion protein, the glue that keeps normal cells together, suppresses cell growth through small molecules called miRNAs,” Dr. Antonis Kourtidis told HCB News. “We discovered that this structure is missing in many tumors.”

In cultured cell experiments, loss of miRNAs results in abnormal cell growth. But when the miRNAs are restored, abnormal growth was significantly suppressed, according to Kourtidis.

Kourtidis and the other researchers think the discovery of this new, unexpected biology “provides the code, the software for turning off cancer," adding that preliminary results in aggressive breast and bladder cancer cultured cells have been encouraging.

Obviously, the practical use of these findings will take some time.

“There are still many more steps and several years down the road for an actual treatment to be developed from this discovery,” said Kourtidis. “Extensive research needs to be done in identifying the affected miRNAs in each tumor type, in preclinical models, in miRNA delivery methods and, of course, in clinical trials.”

The miRNAs orchestrate whole cellular programs by simultaneously regulating expression of a group of genes. The investigators found that when normal cells come in contact with each other, a specific subset of miRNAs suppresses genes that promote cell growth. However, when adhesion is disrupted in cancer cells, these miRNAs are misregulated and cells grow out of control.

The nuts and bolts of the study are significant, as it brings together two so far unrelated research fields – cell-to-cell adhesion and miRNA biology.

Kourtidis noted that the role of adhesion proteins in cell behavior has long baffled scientists. But now that this link has been discovered, it uncovers a new strategy for cancer therapy.

“Our findings provide a roadmap for a new approach to treatment based on these very small molecules called miRNAs,” he stressed. “However, again, it is still very early to predict how successful this will be. It is very likely this therapy would be combined with current treatments. And of course surgery may also still be necessary.”

The result of their research was published in Nature Cell Biology.