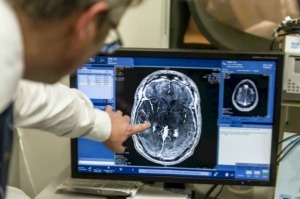 Courtesy of Sunnybrook
Health Sciences Centre
A medical team at Sunnybrook Health Sciences Centre in Toronto used focused ultrasound to temporarily open the blood-brain barrier (BBB) to more effectively administer chemotherapy to a patient’s malignant brain tumor. This is the first time that the BBB has been opened noninvasively.

“We think that it’s important to open the blood-brain barrier to treat a whole host of neurological disorders,” Dr. Todd Mainprize, neurosurgeon and one of the leaders of the team, said in a press conference. “We know that even after surgery with certain malignant brain tumors, there are still lots of cells left behind in the normal area surrounding the brain. By being able to open up the blood-brain barrier, we open up the possibility of delivering either new therapeutics or therapeutics at higher concentrations.”

The team infused the chemotherapy agent, doxorubicin, and small gas-filled bubbles into the patient’s bloodstream and then applied focused ultrasound to areas in the tumor and surrounding brain. That caused the bubbles to vibrate, which loosened BBB cells and allowed high amounts of the chemotherapy agent to enter the targeted regions.

This case is part of a pilot study, involving up to 10 patients, that is investigating the feasibility, safety and preliminary efficacy of focused ultrasound to temporarily open the BBB to deliver chemotherapy to brain tumors.

The current ways to get around the BBB and deliver drugs are limited. Drugs can be directly injected into the brain, but that carries the risk of hemorrhage, infection or damage to normal tissue from the needle or catheter.

The pharmaceutical agent mannitol can disrupt the BBB, but it’s an uncontrolled and non-selective approach and can have negative effects on blood pressure and fluid balance.

But the focused ultrasound approach has risks of its own. There is a chance of brain bleed, so the patient is closely monitored by a large interdisciplinary group involving neurosurgeons, an anesthetist, radiologist, oncologist and physicist.

Although this was the first time the BBB has been noninvasively opened in humans, Dr. Kullervo Hynynen, senior scientist at Sunnybrook Research Institute, has been conducting pre-clinical trials for a decade. In his research, he found that focused ultrasound may also stimulate the brain’s natural responses to fight disease.

“There have been hundreds and hundreds of animal models that have been done, opening the blood-brain barrier in mice, dogs, pigs, and primates, all of which has shown a very good safety profile with no changes in function, behavior or hemorrhage,” said Mainprize.

In one of his studies, he found that opening the BBB seems to facilitate the brain’s clearance of an important pathologic protein that is associated with Alzheimer’s and improves cognitive function. A new study conducted at the Queensland Brain Institute in Australia showed that opening the BBB with focused ultrasound reduced brain plaques and improved memory in a mouse model of Alzheimer’s disease.