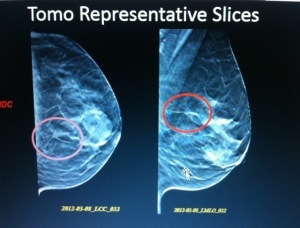 RSNA 2015
Brazilian radiologist Dr. Vivian Schivartche made the case for improving upon breast tomosynthesis at one of the first sessions of the RSNA conference, which opened in Chicago today. Breast tomosynthesis is one of hottest topics at RSNA this year with 63 papers, poster sessions and lectures scheduled.

Schivartche reviewed her use of Hologic's C-View software in 3,000 studies over the past two years and said C-View spots breast cancer sooner and offers other key benefits to patients.

“C-View allows us to convert the 15 views obtained from breast tomography to 2-D images, but requires only a three-second breast compression exposure, compared to a 13-second exposure for the patient without use of C-View. And it only requires about half the radiation,” explained Dr. Schivartche. “That makes a real difference to some patients who I have had tell me that they do not want to endure the discomfort of a 13-second breast compression procedure.”

To make the point, she shared films from one of her patients who had dense breasts, which is found in about 40 percent of patients. The patient had a hard-to-spot invasive ductal carcinoma.

“C-View allowed us to spot the cancer sooner. Otherwise, we probably would not have found this cancer until it was palpable [to the touch],” she said. “So finding it earlier means that this patient was able to avoid radiation therapy.”

Dr. Linda Greer, a radiologist with Honor Healthcare in Phoenix, AZ, echoed Schivartche’s experience with C-View. She said the hospital has five tomosynthesis units and all have C-View installed.

“We were really eager to get C-View because the biggest criticism of breast tomosynthesis is that it exposes patients to higher radiation doses,” she said. “We actually had competing providers trying to scare patients away from our service with talk of increased radiation exposure.” She said with the addition of the C-View, they were able to provide better screening to their patients with lower radiation doses.

Both Schivartche and Greer said there is a learning curve in adopting C-View. But they said overall, it makes reading breast exams quicker with better results and fewer retests – which can make patients anxious. The software also lowers health care costs because C-View helps eliminate expensive follow-up biopsy surgeries and MR exams.