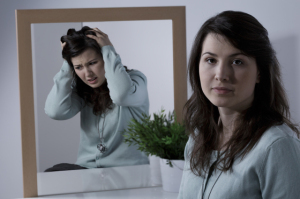 The overall heritability of the bipolar spectrum is quite high — in the mid 70 percentile — Dr. Sophia Frangou, professor of psychiatry at the Icahn School of Medicine at Mount Sinai in New York City, told HCB News.

For those whose parents or siblings suffer with bipolar disorder, that can be a tough statistic to swallow.

But as the lead author of a new study that shows a natural resilience in some people to avert the onset of the illness through their brain connectivity, Frangou is optimistic that there will come a time when doctors have the necessary tools to help patients avoid the disease altogether.

In her research, Frangou and her colleagues used functional MR to examine the connectivity patterns in the brains of siblings, most of whom where in their 40s. The groups contained patients with bipolar disorder, their siblings who did not develop the illness and unrelated healthy individuals. According to Frangou, the particular age group was selected because most mental illnesses begin before the age of 40, and the researchers wanted to avoid the big age differences between parents and their children.

“A family history remains the greatest risk for developing bipolar disorder, and while we often focus on risk, we may forget that the majority of those who fall into this category remain well,” she said. “Looking for biological mechanisms that can protect against illness opens up a completely new direction for developing new treatments.”

The scans occurred while each participant performed an emotional and a non-emotional task that drew on two different aspects of brain function known to be affected by bipolar disorder.

The resilient siblings and the patients showed similar abnormalities in the connectivity of brain networks involved in emotional processing. However, the resilient brothers and sisters showed additional changes in brain wiring within these networks.

One of the strengths the study was carefully selecting the resilient siblings. That was harder than it looked because resilience cannot be considered a fixed trait, the study’s conclusion stated.

Researchers took extra care to make sure none of the relatives showed any signs of psychiatric problems. The likelihood that these relatives selected will have mental illness later on in life is statistically very small.

Frangou will be pursuing more research on mental illnesses and brain connectivity, including examining the well relatives of patients with schizophrenia. She wants to eventually work with psychologists and other mental health experts to train them on how to help build up brain connectivity in patients to help them fend off mental illness despite their genetics.

“Our research should give people hope that even though mental illness runs in families, it is possible to beat the odds at the genetic lottery,” she said.