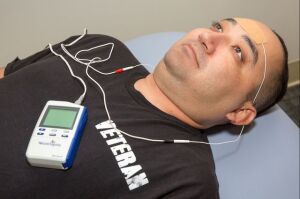 “We were looking at TNS (trigeminal nerve stimulation) for seizure control and it worked well,” said Dr. Andrew Leuchter, Professor of Psychiatry at Semel Institute for Neuroscience and Human Behavior at UCLA Health. “The other interesting finding was that patients reported that regardless [of whether] the device reduced seizures, their mood and anxiety level improved.”

This prompted a separate, investigational device study to learn if the treatment would benefit rape, car accident and domestic abuse victims who suffer from post traumatic stress. These patients, who had already undergone extensive psychotherapy and anti-depression medication treatments, also reported significant improvement.

“We saw an improvement of 30 percent of specific core symptoms such as sleeplessness, nightmares, depression and anxiety,” said Leuchter. “These are a chronically ill group of patients and to have some of them report being able sleep through the night was very exciting.”

The TNS treatment uses a small device about the size of a pack of cards to deliver low intensity, high frequency current to the trigeminal nerve, one of the major nerves to the brain. Patients apply a patch from the TNS device to their forehead while they sleep.

Based on the civilian study result, he said that another study is in planning at the VA Greater Los Angeles Healthcare System. The VA study is a placebo-controlled comparison study, the standard in research. Some veterans will receive the actual treatment TNS device. Other patients will be given a non-operating dummy model. Leuchter said that all the placebo veterans would also be offered the device when the study concludes.

“TMS is very effective – we do 2,500 treatments a year here at UCLA,” said Leuchter. But he said the new TNS therapy, if FDA approved, would be far more accessible to patients as an add-on treatment at a lower cost.

Leuchter said that he is not sure why the TNS brain nerve stimulation works.

“We do have published studies [showing] that a change in specific areas of the brain reduces feelings of anxiety, and the trigeminal nerve feeds those areas of the brain,” he explained. “The brain in many ways is the last black box of medicine. It is locked up in the skull and it’s a complex organ.”

According to UCLA, PTSD affects approximately 3.5 percent of the U.S. population but a much higher proportion of military veterans. An estimated 17 percent of active military personnel experience symptoms. Some 30 percent of veterans returning from service in Iraq and Afghanistan have had symptoms.