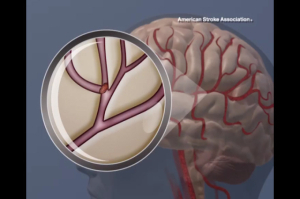 Clot busting drugs, like tPA, for stroke patients have yielded excellent results in the past few decades, but only if administered in less than four and a half hours. And endovascular treatment – an invasive treatment in which doctors go after a clot in the vessel with a stent retriever – can help patients up to six hours after a stroke. But a cohort study has found evidence that CT perfusion can identify patients who can still benefit from endovascular treatment up to 18 hours after their stroke.

“All may not be lost for patients presenting with a severe stroke after 6 hours,” Dr. Jenny Peih-Chir Tsai, MDCM, study author and Neuroimaging and Vascular Neurology Fellow at the Stanford Stroke Center, told HCB News. “But we need more definitive data to answer the question of whether endovascular therapy is indeed beneficial for these patients beyond six hours. That is the basis for three currently ongoing randomized controlled trials. All of these studies use CT perfusion.”

A CT perfusion imaging scan before endovascular therapy tells doctors what areas of brain tissues are salvageable. The study of 102 patients who had endovascular therapy between six and 18 hours after their stroke found that 61.7 percent of patients had a good recovery — which is defined as little or no disability. By comparison, patients treated in the commonly accepted time protocol of four and a half to six hours achieved good recovery in 71.4 percent of cases.

“We now have a very effective treatment for the large and disabling acute strokes,” Tsai said. “And we know that there are patients likely to benefit from interventional treatments who are not being captured using basic imaging and time criteria alone. We need to do better.”

Stroke is the fifth leading cause of death and one of the leading causes of disability in the United States, according to the American Stroke Association.

Tsai stressed that the cohort study compares outcome groups and does not yet indicate a treatment protocol change.

“Our study showed that we can use CT perfusion to identify patients that may do well with endovascular therapy beyond the six hour window,” she stressed. “But the definitive answer to whether there is benefit in treating stroke patients with endovascular therapy beyond six hours using only imaging selection must come from a randomized, controlled trial. That is the next step, and these studies are ongoing.”

According to Tsai, Stanford is the coordinating center for the National Institute of Health-funded DEFUSE 3 research on stroke. She said a total of 45 U.S. medical stroke centers are participating.