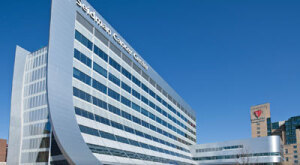 SBRT targets just part of the prostate, rather than the entire gland. “If successful this study may lead to a routine option to treat only part of the prostate containing cancer, instead of treating the entire prostate initially,” Dr. Rodney Ellis, lead author and Associate Professor of Radiation Oncology and Urology at Seidman told HCB News.

Side effects from whole prostate treatments include incontinence, loss of sexual function and risk of damage to the bladder and rectum associated with current whole gland radiation therapy. The trial’s first patient underwent treatment in early April with no reported side effects.

“The advantage [of SBRT] for patients is the ability to treat the cancer with anticipated fewer side effects. The reduction from nine weeks (current protocol) to three days of SBRT is also a tremendous cost savings.”

In 1998, Ellis was the first clinician to use functional imaging to escalate dose in the prostate gland using brachytherapy and SPECT/CT images, according to Seidman Cancer Clinic. The methodology for the current SBRT trial method was conceived in 2004 from his prior research.

“The recent addition of functional imaging to see the behavior of tissue in addition to standard MR images has opened new confidence in being able to locate the region of the prostate that has cancer,” Ellis explained. He added that it has become standard to use MRI to make a diagnosis by directing biopsies, rather than taking blind biopsies throughout the prostate to look for cancer.

The initial trial will include 12 patients. Ellis said that if they can confirm the SBRT findings, the team would seek additional funding to include more patients. Initial results have already been accepted for presentation at an international scientific conference in June.

If successful the study may lead to a routine option to treat only part of the prostate instead of the entire gland. But the idea could be applicable to other cancer patients.

“While this study and the results of the first patient appear to validate the patented methodology being used in the trial, it may be applicable for other types of cancer and for non-radiation-based treatments as well,” said Ellis.

He added that the SBRT study has multiple objectives. It is evaluating the ability to confirm that MR findings truly represent cancer. The study will define the volume of the gland that needs to be treated beyond the measurable MR findings to be sure that microscopic parts of the disease are also treated. And finally the trial will be seeking to improve quality of life by reducing or eliminating side effects.

According to American Cancer Society estimates, in 2016 there will be 26,000 deaths from prostate cancer, with 181,000 new cases diagnosed. About one in seven men will develop the disease in their lifetime, primarily in older men. And the National Cancer Institute notes that 80 percent of prostate cancer is identified in the early stage, when lesions are still localized in the prostate.