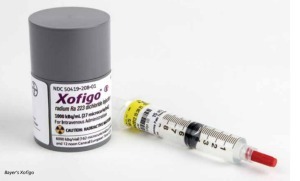 The North American nuclear medicine/radiopharmaceuticals market was worth almost $2 billion in 2015 and is expected to reach about $3 billion by 2020, according to a market report from Reportlinker. The aging population, growing prevalence of cancer, interest in hybrid imaging, the rise in public awareness, abundance of radiopharmaceuticals and technological advancements are contributing to the growth in the market, according to MD Buyline.

FDG is the most widely used radiopharmaceutical on the market, and with more facilities making it the price is decreasing. Big commercial entities are producing it in larger volumes. “Some academic sites are stepping away from that because the commercial entities can make large batches and can distribute it to the hospitals that need it,” says Suzanne Lapi, president of the Society of Nuclear Medicine and Molecular Imaging’s (SNMMI) Radiopharmaceutical Sciences Council.

The three major companies that produce FDG in North America are Cardinal Health, Isotech and Cambridge Isotope Laboratories, according to MD Buyline. PETNET Solutions, a wholly-owned subsidiary of Siemens Medical Solutions USA, is another manufacturer of FDG and it accounts for more than 90 percent of the products it produces. When CMS introduced the Three Scan Rule in the U.S. about three years ago to limit the number of PET scans a patient can have, the demand for FDG fell.

Volumes growing again
“It created a lot of confusion with imagers and I think that’s what drove some of the market retraction back at that time, but I think that confusion has generally been clarified and people understand it now,” says Barry Scott, CEO of PETNET. “Over the last year and a half, we have started to see FDG volumes slowly growing again.” Reimbursements for radiopharmaceuticals have dropped due to bundled payments. They are now being bundled with some SPECT procedures, so the facilities aren’t receiving separate reimbursement for the radiopharmaceuticals anymore.

It’s well known that PET bone scans and other PET exams have experienced reductions in reimbursement. There are several radiopharmaceuticals that now have reimbursement rates that are less than the cost of the radiopharmaceutical. SNMMI is working to change this by providing education and outreach on how these bundled payments may affect procedures and how the reimbursement should actually be carried out. For example, with PET/CT and PET/MR, SNMMI is trying to educate people on what the true costs are.
1(current)
2
3
4