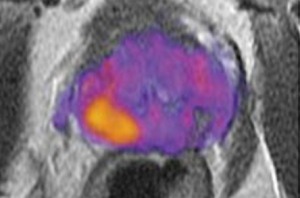 All this without a biopsy.

“RSI-MRI is a special type of MRI that takes advantage of the natural properties of how water moves through tissue over time,” Natalie Schenker-Ahmed, Ph.D., one of the researchers in the UCSD Department of Radiology told HCB News. “Because of the short time required and noninvasive nature of RSI-MRI, we anticipate that RSI-MRI has the potential to become a standard screening procedure.”

The movement of water is impeded by different tissue structures. RSI-MRI can separate the signal from water that moves freely from water that is trapped within a cell and its cell nucleus.

For patients, this scientific breakthrough could mean that prostate cancer can be diagnosed in five minutes or less, compared to current imaging that requires up to 40 minutes. A follow-up biopsy is not required, which can also reduce costs and eliminate patient discomfort. Also, a contrast dye injection, which is not possible on patients with any kind of kidney function impairment, is not required.

Schenker-Ahmed said RSI-MRI also provided more enhanced views than current imaging methods. This prevents over-detection and over-treatment of patients with low-grade cancer that is not life threatening and does not require treatment.

She also pointed out that RSI-MRI spots cancer as well or better than than current imaging protocols.

“The key to reducing prostate cancer mortality is early detection,” said Schenker-Ahmed. “If men receive regular RSI-MRI screening, then it is more likely that high-grade cancer will be identified early enough to provide definitive treatment before the cancer spreads.”

According to the National Cancer Institute, prostate cancer is the second leading cause of cancer death in men in the U.S., with more than 26,000 estimated deaths this year and 180,890 new diagnoses predicted. The average age at the time of diagnosis is 66.

Schenker-Ahmed said the next step will be to expand the use of RSI-MRI to detect cancer in other organs. She also said that the team plans to evaluate RSI-MRI in guided imaging therapies, such as MR-fused ultrasound guided biopsy and brachytherapy. She added that it will be “years” before RSI-MRI is widely available.

“We are currently working with a few other institutions that are also interested in using this protocol,” she added.