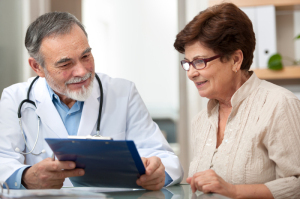 Surgical study finds that the difference in imaging and surgical positions in planning breast cancer surgery may contribute to early breast cancer re-operations. A team at Brigham and Women’s Hospital in Boston (BWH) has concluded that the difference between preoperative prone (or face down) positioning for MR and face-up positioning for surgery may contribute to surgeons missing residual tumors.

The study recommends that a supine MRI position may be considered in some women undergoing lumpectomy pre-surgical planning.

“We conducted the study to help determine methods of reducing the need for re-operation for women undergoing breast-conserving therapy for breast cancer,” Dr. Eva Gombos, a radiologist and lead author of the study which was just published in Radiology told HCB News. “This happens 15-40 percent of the time in the United States and around the world.”

The researchers demonstrated that considerable deformity of the breast and tumor position occurs when patients are imaged in the face down position.

“Our analysis highlights that supine MRI before surgery may provide surgeons with more detailed and accurate information and could lead to effective tumor removal,” said Gombos.

“There are (due to the different positioning) major changes in tumor location, size, shape that can lead to suboptimal surgery of positive margins and re-operations,” she explained.

The new phase 1 clinical trial study was conducted at BWH with the participation of 15 patients between December 2012 and December 2014. Patients in the study underwent standard diagnostic MR imaging in the usual prone position as an outpatient preceding surgery. Twelve patients underwent lumpectomy and post-surgical supine MRI during the operation. Half had pre-procedure supine imaging.

Researchers found that specifications of the tumor, including size and location in the breast, were substantially different depending on the position of the woman when she had her MRI. According to Gombos a larger study is planned.

Gombos reports there has been “enthusiasm and excitement” from colleagues over the findings.

The study was conducted using an Advanced Multi-Modality Image-Guided Operating Suite (AMIGO). The AMIGO consists of an operating room and interventional suite facility with a full array of imaging modalities for use during surgical procedures. This allows radiologists and surgeons to continuously view relevant imaging data in the OR, including prior views.