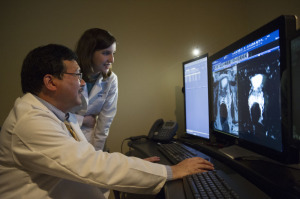 Dr. Yu and Dr. Winks reading MR
Imagine if a doctor's accuracy in diagnosing a patient's prostate cancer could be improved by 50 percent. With the combination of MR and ultrasound, doctors from the Virginia Commonwealth University (VCU) Medical Center think they have illustrated this improvement — and they've done it in a fast, simple way.

“Ultrasound/MRI fusion prostate biopsy is very simple, quick and safe,” Dr. Jinxing Yu, director of oncologic and prostate imaging at the university’s department of radiology, told HCB News. “For prostate [TRUS] biopsy, the success rate is 30 to 40 percent, and fusion biopsy is up to 85 percent.”

A fusion biopsy takes approximately 20 minutes, according to the announcement, which is significantly less than the hour that it used to take the team when they moved the patient in and out of the MR scanner as a needle was being guided to the biopsy area.

“At most places, there will be a radiologist reading the MR image and a clinician performing the biopsy,” said Yu. “The person reading the image and [the] person putting in the needle are different. Sometimes you don’t get the same result.”

Dr. Sarah Wink, an attending physician, said that if patterns from the imaging sequences are put together, the doctors can be more confident in which area may have cancer. She also said that the MR helps them determine how aggressive a cancer is based on how far the tumor is extending outside of the prostate.

One patient treated by Yu, Andrew Harder, learned that he had a higher-than-normal prostate specific antigen (PSA) level, and after three TRUS biopsies still could not determine if he had prostate cancer. He was referred to Yu who performed an MR scan on him and found a tumor. A biopsy was then performed, and after starting a treatment plan for prostate cancer, Harder now has a normal PSA level.

“Five years ago, 95 percent of patients with prostate cancer or a high PSA would never get any imaging. Right now, I think probably 50 or 60 percent get imaging,” said Yu.

He hopes that the advanced MR/ultrasound technology means a more positive change in the standard of care and that it will become a gold standard test for all patients with a high PSA.