MR exams are among most frequently 'rationed' health services: study 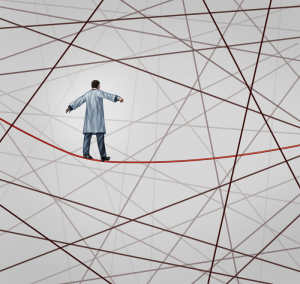 Walking the cost-benefit tightrope
in a value-based era
A team of physicians and biomedical ethicists have finally crunched the numbers on a well-known health care practice: sometimes, despite established protocols, doctors don’t order tests that may benefit patients.

“People get upset when we say we ration care in America,” Dr. Robert D. Sheeler, lead researcher formerly at Mayo Clinic, told HCB News. “But we, as a society, need to be mature and more sophisticated in discussing these issues.”

The study, published recently in the Journal of General Internal Medicine, was modeled to expand on a European study that yielded similar results. The random sample survey was mailed to nearly 4,000 U.S. physicians across specialties.

The team got a 65.6 percent response rate, an indication of keen interest in the topic.

Prescription drugs (48.3 percent) and MR (44.5 percent) were listed as the most frequently rationed aspects of care. X-rays, lab tests and specialty referrals followed (20-40 percent). Primary care physicians in small or solo practices were most likely to skip tests or name brand drugs if the services offered minimal benefit, and specialists and surgeons were found less likely to exhibit rationing behaviors.

Sheeler, who recently left Mayo to work for a private genetics and biomarker company, cited lack of insurance or high deductibles as the most likely financial factors at play. The study also speculated that avoiding excessive insurance paperwork for perceived minor benefits could also be a factor.

“In truth every decision I make as a doctor has a financial consideration,” Sheeler said. “Do I order every electrocardiogram on an emergency basis, which costs twice as much? Or do I schedule the test to save the patient money? It depends on the patient’s needs.”

The survey asked doctors mostly indirect questions about rationing behavior in the past 30 days. Physician responses included skipping tests that offered minimal benefit to patients or using older formulary prescription drugs rather than newer drugs that might offer added benefits at an added cost.

One survey question that specifically used the term “rationing” scored lower than the other behavioral questions, indicating that it may be a "hot button" topic among doctors.

“There was a feeling in medicine for a long time that if you are not ordering every test or treatment possible, then you don’t care about me,” Sheeler added. “But this started changing when insurance deductibles got higher.”

He recalled the case of a family member who was dying from Alzheimer’s. Sheeler finally directed the hospital to stop running a battery of diagnostic tests every time the patient ended up in the hospital — It was not going to change the outcome and it was unkind to the patient.

Sheeler said that as far as he knows, this was the first U.S. study to focus on rationing behaviors rather than solely on rationing attitudes among physicians.

The study cited the AMA Council on Ethical and Judicial Affairs: “Making cost-conscious decisions is not far removed from the professional judgments physicians already make. Physicians routinely decide whether interventions with small benefits are worthwhile."