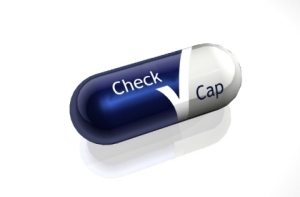 Check-Cap is entering an agreement with GE Healthcare to develop efficiencies for producing a high volume of preparation-free ingestible colon cancer screening capsules.

The ingestible Check-Cap capsule, which is in clinical trials, relies on ultra-low dose X-ray, wireless communication and positioning technology to scan the inside of the colon.

“Although there are a number of effective methods available for colorectal cancer screening, nearly one-third of eligible adults in the U. S. have never been screened,” Bill Densel, CEO at Check-Cap told HCB News. He said that the collaboration with GE will provide the opportunity to increase production of capsules for future clinical trials and commercialization.

The Check-Cap system is designed to be an alternative to screening tests that require bowel preparation — a disagreeable cleansing process — in order to examine the internal colon for the presence of colonic polyps and cancers. Traditional endoscopic colon scans also require a patient to undergo anesthesia, as well as risk possible infections from improperly cleaned surgical scopes.

“The Check-Cap system utilizes X-rays and it does not require bowel preparation, which has been shown to be a significant barrier to screening,” Densel said. Another form of low tech screening using test strips is also objectionable for many patients, as it requires stool handling.

The value of Check-Cap shares rose 74 percent after the partnership with GE Healthcare was announced, according to the Engelwood Daily.

According to Densel, to date 75 participants enrolled in a clinical study at multiple sites have demonstrated safe and complete passage of the Check-Cap device. He also said the capsule was tracked through 54 participants using radio frequency telemetry and proprietary position tracking.

“Capsule passage was safe and well tolerated, with an average transit time of about 66 hours. The total radiation dose was found to be ultra-low, the equivalent exposure of one dental or chest x-ray,” Densel explained.

He noted that the capsule reconstructed three-dimensional image of the colonic wall for physician study. Check-Cap detected and located small and large pedunculated and sessile polyps, which were subsequently validated by traditional colonoscopy.

Colorectal cancer is the second leading cause of cancer death in the U.S., with an estimated 134,000 diagnoses and 49,000 deaths projected in 2016.