Wearable PET helmet may allow for imaging patients in motion 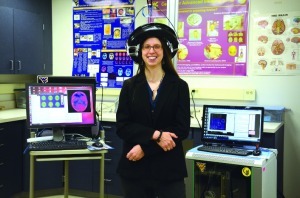 Dr. Julie Brefczynski-Lewis
A team of researchers led by a West Virginia University (WVU) neuroscientist is making headway toward a lower-dose portable PET scan system that is worn like a hat.

“It would create a new niche for whole brain imaging of a moving participant,” Dr. Julie Brefczynski-Lewis, Ph.D., research assistant professor at the WVU School of Medicine, told HCB News. The device has been dubbed the AM-PET (ambulatory, micro-dose) helmet.

A few years ago, a precursor device called RatCAP was developed for use in research with rats. A fellow faculty member and AM-PET research collaborator physicist and radiologist, Stan Majewski, came up with the first design for humans and obtained a patent in 2011.

The ability to conduct PET scans on people in motion opens up many new possibilities for diagnosing diseases, said Brefczynski-Lewis. Traditional large machine PET scans require patients to remain still for up to 90 minutes. This is difficult for many patients, such as those suffering from Alzheimer’s or autism. With the AM-PET helmet a scan can be made while a patient is sitting and talking.

The current generation device also uses only about a tenth of the radiation used by a full scale, fixed PET machine.

But the team is still working on some limitations.

“The biggest hurdle going forward is to create the ideal balance of sensitivity, weight and mobility,” Brefczynski-Lewis explained. “There are trade-offs that must be balanced, and more than one unknown variable to work with simultaneously.”

The team is looking at the use of robotic balancing to improve stability of the helmet and to compensate for motion. A mobile backpack version that can be used outside the lab is also another possible application.

In addition to the great potential for identifying diseases earlier – such as brain activity during Alzheimer’s memory tests – the AM-PET helmet has other unique potential. Brefczynski-Lewis, who has conducted studies on meditating monks, said studying brain activity with the AM-PET helmet might provide new insights as to why someone possesses a particular skill - such as music or athletics.

In 2013, the WVU professors teamed up with the University of California, Davis, the University of Washington and General Electric to win a $1.5 million BRAIN initiative grant. UWV also contributed seed money for the project.

The project is gaining support in the neuro and imaging field, according to Brefczynski-Lewis.

“Some were excited right from the start, including those who awarded the BRAIN Initiative grant, yet some were also skeptical at first,” she said. “But novel neuroimaging techniques like dynamic imaging and the ability to tolerate motion during long duration scans has won over many skeptics.

Brefczynski-Lewis also hopes that future observations with the AM-PET helmet might help to end stigma about mental illness.

“I want people to accept that they have an imbalance, and they are not doing something wrong. This is something that is treatable just like diabetes – it just happens to be in your brain,” she added.

The BRAIN initiative was established by President Obama in 2013 with $110 million in initial budget funding.