MR coils: the pursuit of a better signal-to-noise ratio 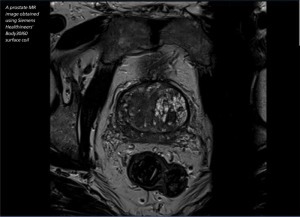 The signal-to-noise ratio (SNR) of MR imaging is intrinsically weak and limits the speed of the exam and the resolution of the images. Researchers at the University of Houston (UH) have developed a high-temperature superconducting coil called the cryo-coil that boosts the SNR by a factor of two to three compared to conventional coils.

“For small coil sizes at high-field MRI, when the coil noise is the governing source of noise, it has long been recognized that cooling the receiving coils or using high critical temperature superconductors (HTS) materials reduce this noise contribution and therefore can significantly increase the SNR,” says Jarek Wosik, a principal investigator at the Texas Center for Superconductivity at UH.

The improved SNR from the cryo-coil allows physicians to see details that cannot be seen when conventional coils are used. Those details don’t show up even when multiple images are acquired using conventional coils. For initial studies, the cryo-coil has been optimized for rat brain imaging. At the International Symposium of Magnetic Resonance in Medicine’s annual meeting in May, the researchers reported that they demonstrated an isotropic resolution of 34 microns in rat brain imaging.

The cryo-coil has been developed for preclinical MR imaging, but it’s also intended for clinical imaging. Since clinical applications involve imaging a larger area, an array of small coils needs to be used. The research in animal models produces useful information for improving diagnosis and treatment of human diseases and disorders. This work has the potential to benefit clinical MR through highquality imaging and by shortening the time the patients are in the scanner, according to Wosik.

The researchers have already built two prototypes, which have been installed at the University of Texas Medical School and are collecting data. UH’s spinoff company, Cryo-sensors, is in the process of writing Small Business Innovation Research proposals for the cryocoil, and Wosik expects a commercial coil to be available within one to two years. A few companies have introduced cryogen-free magnets to the market, which could provide a much easier way to integrate cryocoils into MR. MR Solutions offers a 7T preclinical, cryogen-free MR system, and Time Medical Systems is offering a similar scanner.

Another way to improve SNR
Since poor coil placement results in a large loss in SNR, a coil that fits perfectly on top of the patient’s anatomy is ideal. Researchers from the University of California, Berkeley, have found a way to create light, flexible MR coils with screen printing technology. The coils can be individually designed with the screen printer to fit patients of different sizes, including infants and toddlers. They can also be custom made for individual patients.
1(current)
2
3