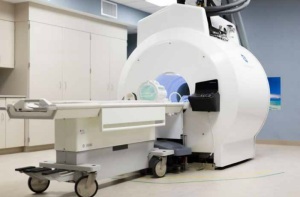 More than 5 million people in the U.S. are living with Alzheimer’s disease and this year, along with other dementias, it will cost the nation $236 billion, according to the Alzheimer’s Association. It’s a challenge to diagnose the disease before the onset of symptoms, but researchers are investigating whether MR imaging can spot the signs of the disease earlier.

“MR has the best soft tissue contrast,” says Jonathan Furuyama, product manager of MR at Toshiba America Medical Systems. “In terms of being able to monitor brain matter volumes, it’s definitely superior to all other modalities. CT doesn’t have quite the soft tissue contrast that you would like if you’re looking at things like volumes.”

Members of COST Action, networks centered around nationally-funded research projects, recently brought 200 scientists together to develop an MR imaging tool that uses a noninvasive technology called Arterial Spin Labelling (ASL). It measures blood flow to the brain, which helps clinicians determine if brain cells are being properly nourished with oxygen and glucose.

“ASL is a big thing. They are trying to see if blood flow patterns are early indicators of some sort of cognitive decline,” says Furuyama. “If you were to do similar things on CT, you have to inject iodine and not everyone can.” ASL has been under development for 15 years, which has resulted in a variety of methodologies and techniques. The scientists had to rigorously analyze literature to find the best method for measuring blood flow. They then published a paper in January 2015 that serves as a reference.

Toshiba, Siemens Healthineers, GE Healthcare and Philips Healthcare offer ASL on their MR systems, and GE, Siemens and Philips are already using the ASL tool. COST Action is working with the Quantitative Imaging Biomarker Alliance to have ASL recognized around the world as a biomarker for dementia.

When PET data is used in conjunction with MR data, it can be useful for assessing dementia. Researchers from the Montreal Neurological Institute and Hospital analyzed a considerable amount of patient information, including MR and PET exams, and found that decreased blood flow in the brain is the earliest sign that a patient may have dementia.

The data was pooled from the Alzheimer’s Disease Neuroimaging Initiative database, which includes more than 30 institutions across Canada and the U.S. They analyzed more than 7,700 brain images from 1,171 patients with various stages of Alzheimer’s. The research, which was published in Nature Communications in July, also revealed that changes in a patient’s cognitive abilities start earlier than previously thought.
1(current)
2
3
4