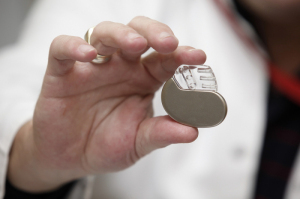 Radiologists and cardiologists working together at Emory University Medical Center in Atlanta have observed no adverse effects conducting MR scans on patients with a wide-variety of vendor-implantable devices to regulate heart function. Their findings have been published in the September edition of the American Journal of Roentgenology.

"Our results show that with a multidisciplinary workflow, patients with conventional and MR conditional pacemakers and defibrillators can safely undergo MR imaging," Dr. Courtney Moreno, co-author and associate professor of radiology at the university, told HCB News.

Device reprogramming was required in 63 percent of patients before the MR exam. Artifacts or objects related to the MR were described in only 3.5 percent of reports, and were associated with having the pulse generator in the view.

According to Moreno, the study demonstrated that the 1.5 T MR procedure is safe for CIED patients, although close monitoring before and during the exam is required. She also said that the study should help encourage payors to revise their policies.

An estimated 400,000 pacemakers and implantable cardioverter-defibrillators are implanted each year in patients in the U.S., according to the American Roentgen Ray Society. More than three million Americans are living with such a CIED, and roughly half of them will have an indication for MR during the lifetime of their device.