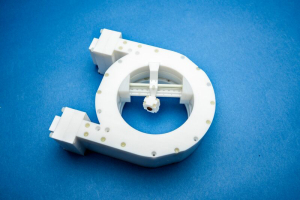 Guidabot
Guidabot LLC, a joint venture between the University of Houston (UH) and Fannin Innovation studios, has received a one-year, small business technology transfer grant for $225,000 from the National Science Foundation (NSF).

The project will continue development of an all-plastic device to enable doctors to perform biopsies while a patient is in an MR scanner.

"The robotic device enables physicians to perform procedures while the patient remains inside the MR scanner using MR images on the fly to interactively position the interventional tool," he told HCB News. "This streamlines and reduces the duration of the procedure, and increases accuracy."

According to Heffernan, the device works because of a unique plastic bead needle design developed by Nikolaos Tsekos, Ph.D., associate professor in the Medical Robotics Lab at UH. He explained that a key challenge was coming up with a method of actuating the needle manipulator without using conventional robotics components, which contain metal and are not safe to use in the MR.

"Dr. Tsekos conceived the idea of using plastic beads contained within a round channel or flexible tubing, to convey force in a manner similar to hydraulic systems," Heffernan said.

The team developed the all-plastic Guidabot to overcome exiting protocol biopsy limitations. These include relying on periprocedural MR scans (rather than real-time) and tissue movement after the MR scans are completed.

He noted that software that controls the Guidabot also activates the MR scanner to collect data, and rapidly reconstructs the image for the attending physician.

"The integration of the robot, the MR scanner, and the operator, improves streamlining and reduces workload," said Heffernan. "This allows the physician to focus on the intervention rather than on procedural tasks such as the control of the MR scanner or image preparation."

The project initially received a $1.5 million grant from the NSF under a program that supports small business innovation with the potential of having great commercial success and making a positive societal impact.

The new $225,000 grant will support further development of the prototype robot and proof-of-concept studies with MRI phantoms.