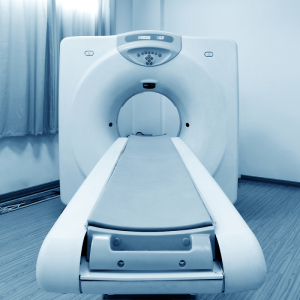 Even as big data and advanced technology make giant contributions to improving CT scan results, the technologist's role in properly positioning a patient remains of primary importance, according to a recent Philips white paper on the subject.

“Patients that are not properly centered do not have their center of mass properly aligned with the center of the bowtie [X-ray intensity shaping] filter, which affects the attenuation of the X-ray beam and image noise, the paper notes, adding, “As a result, dose optimization efforts to reduce radiation dose while maintaining image noise may be compromised in miscentered patients.”

Proper positioning requires that the technologist “eyeball” the patient so that the “midline (an imaginary line drawn between the patient's eyes to their pubic symphysis) is in the center of the CT bed, and that the table height is adjusted so the center of mass of the region to be scanned is coincident with the center of rotation of the CT scanner.”

If the patient is deemed misaligned, then the technologist adjusts the table and “'rescouts' the patient to ensure the scanner recalculates the automatic exposure control needed for optimum image quality.”

The white paper noted, however, that patients are all too often not lined up correctly. “Retrospective studies have shown that patient off-centering is less prevalent in the x,y direction, and most pronounced in the vertical direction. In one study, 67-85 percent of patients were miscentered more than 1 cm below isocenter.”

Studies have also shown that the size of patient appears to be a big reason behind this miscentering. Those who are mispositioned above isocenter tend to be larger patients. But smaller patients tend to be the most often miscentered, the paper advised.

In a 2007 study of the issue of patient positioning, GE Healthcare researchers evaluated the records of 273 adult body patients and reported in the Journal of Medical Physics that “retrospective analysis of adult body scout Surface Plasmon Resonance (SPR) scans shows that 46 percent of patients were miscentered in elevation by 20-60 mm with a mean position 23 mm below the center of rotation (isocenter). The analysis indicated a surface dose penalty of up to 140 percent with a mean dose penalty of 33 percent assuming that tube current is increased to compensate for the increased noise due to miscentering.

Authors T. Toth, Z. Ge and M.P. Daly added that “clinical image quality and dose efficiency can be improved on scanners with bowtie filters, if care is exercised when positioning patients.”

A 2014 report in the American Journal of Roentgenology also observed frequent errors positioning of patients, specifically for chest scans. “Regardless of patient size, most patients in this study were positioned too low, which negatively affected both patient dose and image noise. Miscentering was more pronounced in smaller pediatric patients,” observed lead author Touko Kaasalainen of the Helsinki University Central Hospital.

He added that, “we conclude that vertical off-centering of a patient for chest CT is a common and serious problem regardless of patient size.”