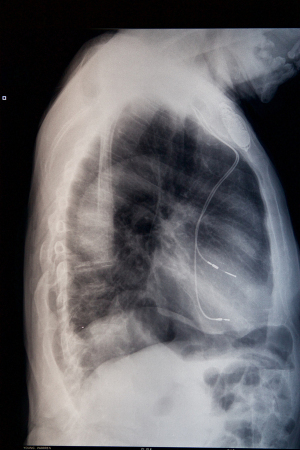 The wires powering removed patient pacemakers and defibrillators are sometimes left in place, and now a new study shows that that they can double the chances of both major and minor complications down the line.

“Device infection is a very serious, life-threatening condition with a 66 percent risk of death if left untreated,” said senior study author Dr. Oussama Wazni, from the Cleveland Clinic, in the online September issue of the Journal of the American College of Cardiology: Clinical Electrophysiology.

Wazni and his colleagues looked at the records of 1,386 patients whose infected devices were removed and 323 of those whose leads had been left in.

Leads are left in, the study noted, for a number of medical reasons, such as the patient's use of anti-clotting drugs or liver issues, or their age.

The study found that when leads were not removed, the operations to extract heart devices took more time – 130 to 220 minutes versus 85 to 155 minutes, the news agency noted.

In addition, one-month mortality was about twice as likely in those with leads not removed – 7.4 percent vs. 3.5 percent.

“Many are unaware of the increased risk, but more importantly, removal of non-functioning leads requires special skills that a majority of device implanters do not have, and specialized equipment as well,” noted Wilber.

Surgeon experience can play a key role when a tricky lead extraction comes up.

“Even the best surgeons or cardiologists involved in lead extraction will occasionally be challenged by difficult cases,” Dr. John Fisher, a researcher at Albert Einstein College of Medicine and Montefiore Medical Center, not involved in the study, suggested to the news service.

Surgical issues surrounding the use of cardiac devices have grown in importance as the market for such devices continues to surge. As HCB News reported in August, for example, “in 2015, [transvenous implantable cardioverter-defibrillator] T-ICDs led the overall implantable defibrillator market revenue, and [it is] projected to grow at a CAGR of 4.9 percent during the forecast period [2015-2022],” according to Allied Market Research, which added that “wearable external defibrillator segment is expected to grow at a remarkable CAGR of 12.3 percent, owing to the noninvasive nature and increased demand of home health care for the treatment of sudden cardiac arrest.”

There have also been advances in the leads themselves. AS HCB News reported in June, BIOTRONIK's Solia S ProMRI, received FDA approval.

"Patient anatomy is unique to each and every patient," Dr. Ulrika Birgersdotter-Green, director of pacemaker and ICD services at UC San Diego Health, told HCB News at the time. "For patients with small or complex vessels, complications such as vein occlusion are more likely to occur when using a lead with a wide diameter body. The smaller lead body helps maximize available blood flow and leave room for additional therapies."