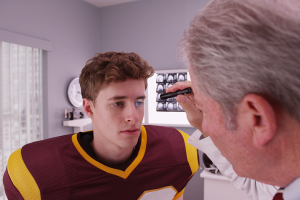 In an imaging first, researchers at Mount Sinai Hospital in New York have found chronic traumatic encephalopathy (CTE), at the center of the NFL's concussion controversy, on a live, retired player, rather through a postmortem exam after death. The team, which conducted a "proof-of-concept" study, relied on an experimental agent known as Avid 1451.

"This could enable diagnosis during life and could identify potential subjects for anti-CTE drugs that are now being developed," Sam Gandy, M.D., Ph.D., associate director of the Alzheimer's Disease Research Center at Mount Sinai and director of the Center for Cognitive Health and NFL Neurological Care Program at the Icahn School of Medicine at Mount Sinai, told HCB News. "We found a brain scan pattern in a patient with clinical CTE that closely resembled the pattern that pathologists have seen at autopsy."

Avid 1451 has the ability to latch on to tau protein, which can be viewed with PET imaging. He added that the effectiveness of the Avid 1451 study can only be confirmed in any live subject with a postmortem study.

"We will still want to verify that our brain scans match pathology after players with CTE die and come to autopsy. However, many are vigorous young people and that could take a long time to achieve," Gandy explained. "We present this pattern-matching as a possible way to move forward while we are waiting for the autopsies."

The results of the study were recently published in the Journal of Translational Psychiatry.

Reproduced with permission of Translational Psychiatry, the yellow and red splotches may indicate tau protein

The 39-year old player in the study had a history of 22 concussions and exhibited clinical symptoms of CTE. CTE is a neurodegenerative brain disease that has been associated with repetitive blows to the head in athletes and soldiers. The player reported a wide range of symptoms, including: short-term memory loss, headaches, sensitivity to light, irritability, depression, sleep disturbance, delusions, and other symptoms.

According to Gandy, the next step will be to organize a clinical trial of possible CTE treatments once funds are raised for such a study.

The NFL has come under increasing scrutiny for the growing evidence of a link between repeated collisions to the head and CTE. Dr. Bennet Omalu, the physician who garnered conclusive proof of the injury, said in a Time magazine article last year that 90 percent of NFL players suffer from CTE. Also, according to a CNN report last year, 10 to 20 percent of Iraqi war veterans also suffer from some form of traumatic brain disorder due to battle concussions.