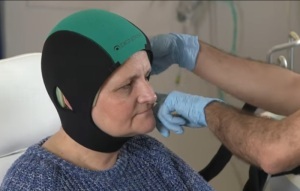 A cooling cap that prevents hair loss during chemotherapy has come through its clinical trials and can make a huge difference to the quality of life of patients, Dr. Paula Klein, medical director, Breast Cancer Clinical Trials, Mount Sinai Health System in New York told NY1.

One such happy patient was Donna Tookes, a patient who was treated with the cap during her breast cancer therapy and had been resigned to hair loss. She told the station, “I accepted it.”

In fact, she did not have to.

Thanks to her participation in a trial of the Dignicap from Dignitana headed by Klein, she didn't lose any hair at all.

The cap “literally freezes the scalp so that it shuts down blood vessels,” Klein told NY1. “Less chemotherapy is delivered to the scalp.”

The cap Klein used pumps coolant through it. The patient's hair is wet and this keeps the temperature of scalp and hair near freezing during therapy. This constricts the blood vessels in the region, and thus reduces the amount of anti-cancer drugs that reach hair follicles.

The scalp-cooling technique has been in use for years in Europe, but is only now gaining FDA clearance and seeing greater use in the U.S. There had been fears that sparing the scalp from treatment might allow cancer to spread to that area. But clinical evidence from Europe has now suggested that this is not the case.

“In Europe they do not show a significant increase in scalp metastases,” said Klein.

The cooling system which chills the hair and scalp to just above freezing during therapy received the agency's okay for a multicenter clinical trial in 2015.

“Some of today’s most powerful, lifesaving chemotherapy treatments still cause complete hair loss, a side effect that many women consider to be emotionally devastating,” Dr. Hope S. Rugo, principal investigator for the study and Director of Breast Oncology and Clinical Trials Education at the UCSF Helen Diller Family Comprehensive Cancer Center noted in a 2015 statement about the trials.

In the Mt. Sinai trials about seven out of 10 early-stage breast cancer patients kept at least half their hair without any negative events linked to the cooling cap.

The FDA clearance is, for the present, limited to early-stage breast cancer, but Klein stated that she thinks it will eventually find more widespread use.

“I am extremely excited to finally be able to offer patients scalp cooling during chemotherapy, which allows them to retain normalcy and privacy in their lives,” she stressed.

For patients, the loss of hair is among the most important chemo side effects, according to a 2008 article published in the journal Psycho-Oncology by Julie Lemieux, Elizabeth Maunsell and Louise Provencher.

They found that “chemotherapy-induced hair loss is considered to be the most important side effect of chemotherapy, frequently ranking among the first three for breast cancer patients, and can lead to refusal of chemotherapy. Secondly, it is described by breast cancer women as causing distress and as being traumatizing. Thirdly, there might be an impact on body image, although not all studies reported this association.”