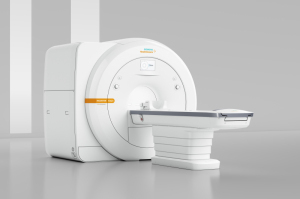 Siemens MAGNETOM Sempra
With an eye to increasing budget pressures, Siemens Healthineers has developed a 1.5 Tesla MRI system that the company says allows radiology practices and hospitals to increase productivity and improve competitiveness.

The MAGNETOM Sempra, presented at RSNA 2016, was developed in response to drops in reimbursement in the U.S., said Daniel Fischer, MR global marketing manager for Siemens.

“Motion alone can cost $100,000 per year in terms of just rescans,” Fischer told HCB News. “The MAGNETOM Sempra is what we consider our solution to really address financial uncertainty. We consider this to be our most cost effective 1.5T scanner.”

Fischer said core scans, such as complete brain scans, can be done in 10 minutes.

The company also said it is responding to the challenge of getting consistent results during exams due to varying levels of experience among staff, as well as high turnover, with its Day optimizing throughput (Dot) software to automate workflow.

As it is doing with its new CT platform, Siemens is including a two-year service plan, in addition to the standard one-year warranty, with its MAGNETOM Sempra.

“For a workhorse system like this, downtime means lost money, lost patients and lost revenue,” Fischer said. “So we’re finding ways to address that.”

Siemens also introduced what it calls Compressed Sensing Acceleration technology for its MAGNETOM Skyra and MAGNETOM Aera 1.5T systems, which decreases acquisition times using an algorithm, meaning that less data is needed for high-quality images, and that images are less affected by motion. Cardiac cine imaging can be done in 16 seconds instead of four minutes, according to the company.

Fischer demonstrated the technology by asking those around him to hold their breath for 25 seconds.

“If this was a cardiac exam, we’re going to do this another 10 to 14 times,” Fischer said. “When you’re a cardiac patient, you’re going to have an issue doing that. … What would typically take 25 seconds, times 10 to 14 times — almost six minutes — can be done in 25 seconds completely under free breathing.”

While Siemens is starting off with cardiac applications, Fischer says the technology will eventually be utilized for musculoskeletal imaging and angiography.

“This is a technology that has a lot of possibilities,” Fischer said. “Any time you’re looking at physiological motions, this technology can really address a lot of issues. A lot of our partners are working with this technology already. We’re seeing applications in the pipeline.”

Fischer compared the technology to the compression of JPEG images, allowing the acquisition of a fraction of the information to make a high-quality image.

“This is really the fastest MR technology that we have put out to date,” Fischer said. “This is going to make a huge impact on MRI and there’s a lot of potential there already.”

Both the scanner and the Compressed Sensing Acceleration technology are pending FDA 510(k) clearance.