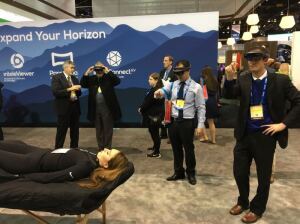 RSNA attendees try their hand
at the Novarad HoloLens 3-D viewing
innovation that superimposes
a virtual medical image projected
over a model patient body
While a conceptual HoloLens 3-D Viewing application is attracting a lot of attention to the Novarad booth at RSNA this week in Chicago, its market-ready digital radiology solution, ChameleonDR, and its new Ncompass workflow offering are the company's innovations that will matter most to radiologists and hospital decision-makers.

According to Fowler, these include such image adjustment options as invert, equalize histogram and contrast equalization, as well as auto rotation. He said that such innovations enable hospitals and clinics to lay ChameleonDR over their existing film component platforms.

He also cited the lower dose the conversion to digital creates through much-improved image quality – in some instances up to a 300 percent lower dose. This is critical as hospitals scramble to meet new 2017 regulations, under which inpatient imaging operations must convert to digital radiology to avoid reduced Medicare payments for film or computed radiology scans.

“What’s important right now is making this transition as painless as possible for all health care providers,” Fowler said.

The Ncompass enterprise imaging platform rollout is supported by the company’s same philosophy to bring all imaging data together with intuitive access, according to Fowler. The platform is designed to integrate with the existing electronic medical record and mobile viewing. It offers clinical workflow modules, such as radiology, cardiology, mammography and orthopedics.

He also stressed that they have not outsourced post-processing support to a third-party vendor.

“We know how to do that,” he noted. “We have that PACS expertise in-house, which we think is more secure and better care for our customer’s patients.”

No doubt the biggest interest generated at RSNA by Novarad was the demonstration of its HoloLens 3D viewing innovation. On Tuesday, RSNA visitors surrounded the display throughout the day. They were offered the opportunity to don a 3-D headset to manipulate a virtual medical image projected over a model patient's body.

Currently the augmented reality product is only for use in research and academic settings, but Fowler said the company’s goal is to eventually position the technology for everyday use by radiologists and surgeons.