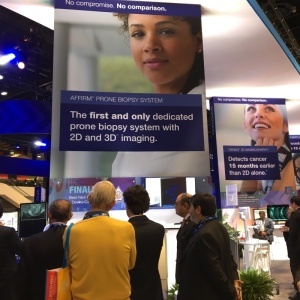 #RSNA16
At the Hologic booth at RSNA in Chicago, the company's Affirm prone breast biopsy system, which the company said is the world’s first of its kind, was a point of emphasis and drew a lot of attention from visitors.

The system — which received CE mark for commercial usage in the EU in March and U.S. FDA approval in April — gives radiologists 360 degree access to the breast with minimal movement to the patient lying on the memory foam platform, allowing the radiologist to better target a lesion.

“This is a completely ground-up redesign and technology innovation,” Benjamin Boese, Ph.D., product director of Biopsy Navigation told HCB News. “The exceptional image quality ensures that the clinician sees everything needed and the manual processes have been engineered out to streamline the work flow and speed up procedures.”

According to Boese, more than 95 percent of the 165 patients surveyed at three locations in Europe post-procedure described their experience as faster, more comfortable and less painful than expected, and 98 percent of them said they would recommend the facility to a friend or family member based on their biopsy experience.

Hologic also introduced its Brevera breast biopsy system with CorLumina imaging technology, which is currently undergoing FDA review. According to Dave Gilstrap, product director of Biopsy Workflow, the needle system is complementary to the Affirm biopsy guidance system. Once the lesion is targeted, the biopsy sample is acquired and automatically verified by the Brevera system, providing real-time results to the physician at the point of care.

“There’s no need to take the sample out of the room and to a mammography unit down the hall,” said Gilstrap. “The physician can make decisions quickly, and the patient doesn’t have to wait on the table – with a needle still in her breast – waiting for the doctor to return with the imaging results.”

Hologic received top marks from U.S. mammography providers in a June independent report from KLAS Research. In this year's KLAS report on Tomosynthesis, doctors, directors of radiology and C-suite executives scored Hologic highest in overall product satisfaction and in confidence that the company will continue to lead the development of the tomosynthesis market.