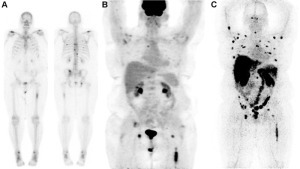 Courtesy of Dr. Neeta Pandit-Taskar
and Dr. Michael J. Morris
Researchers at Memorial Sloan Kettering Cancer Center demonstrated that a new PET imaging agent can detect metastatic prostate cancer in regions that it has previously been difficult to spot. Results from the Phase 1 dose-escalation study of Zr-89-deferrioxamine-IAB2M were published in the December issue of The Journal of Nuclear Medicine.

With an estimated 1.1 million new cases and over 300,000 deaths annually from prostate cancer, it is the second most common cancer among men globally, according to the World Health Organization.

X-ray, CT and MR are traditionally used to determine if prostate cancer has spread to other areas of the body, but it’s often a challenge to image. With this new molecular imaging approach, researchers have shown they can target both bone and soft tissue lesions.

The radiotracer combines a small amount of the radioactive material zirconium-89 with a fragment of an antibody called a minibody. The minibody has anti-prostate-specific membrane antigen qualities that cause it to attach to prostate cancer cells that traveled in the body.

PET then detects the particles that are emitted from the site and the resulting image shows the "hot spots" of PSMA overexpression. This method can detect prostate cancer cells that have metastasized to bone, which is the most difficult to find with standard approaches.

For the study, the researchers imaged 18 patients with new imaging agent, using PET/CT. They also conducted CT, MR, molecular bone and FDG-PET exams and then selected and biopsied the suspected disease sites.

They found the Zr-89-Df-IAB2M PET scans were positive in 17 of the patients with bone lesions found in nine and soft tissue disease found in 14.

In two of the patients, a single site of disease in each patient was found only by Zr-89-Df-IAB2M. In total, the new agent detected 147 bone and 82 soft tissue lesions.

The researchers are hoping that once this approach is further developed, it will help to detect metastatic prostate cancer earlier and more accurately. They believe that after further validation, the agent may be used for targeted biopsies and even targeted radiotherapy.