RSNA gadolinium briefing draws many attendees but no new conclusions 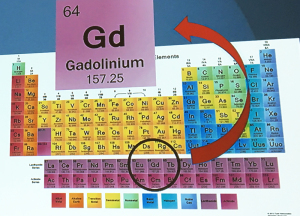 #RSNA16
In recent years mounting evidence has shown that the MR contrast agent gadolinium may accumulate in the brains of patients who are exposed to the heavy metal during imaging exams. While there is no clear assessment yet on the health repercussions from such accumulation, it is a topic that has garnered tremendous attention in the medical community.

At RSNA in Chicago, Bartram Pierce, an imaging technology expert and certified safety officer at Corvallis Clinic in Oregon, set out to address the pros and cons of emerging issues surrounding the contrast agent to a packed house. He would not, however, make any conclusions, instead leaving it to each audience member to use their own judgement while the scientific community awaits further evidence.

He dedicated the first part of his presentation to going over origins of the heavy metal and its development to the medical contrast agent that is used today in 40-50 percent of all MR scans to improve the visibility of inflammation, tumors and blood vessels.

According to Pierce, 300 million doses have been administered in the past 30 years. "We used it however we wanted," he said. "If a single dose was good, a double dose was better."

This is because until recent years, gadolinium had an excellent safety record with a documented adverse reaction rate of just 0.079 percent. According to Pierce, conventional thought was that gadolinium exited the body through urine in 24-48 hours.

But recent evidence raises concerns about how the body retains gadolinium, especially in the brain. There have been documented cases of gadolinium-associated complications such as meningioma, nephrogenic systemic fibrosis, associated kidney plaques, associated anthropogenic (human caused) general toxicity, and retained brain deposits.

"There is no normally occurring gadolinium in the human body," he said. "If it’s there, we (clinicians) put it there."

Pierce also reported that low amounts of gadolinium — which is produced from mined substances and also does not naturally occur in nature — has recently been detected in water supplies in San Francisco. The only source would have to be as a human medical byproduct via waste water.

In July of 2015 the FDA issued this bulletin related to evaluating the risk of brain deposits with repeated use of gadolinium-based contrast agents in MR: "To reduce the potential for gadolinium accumulation ... consider limiting GBAC use to clinical circumstances in which additional information ... is necessary."

Pierce termed gadolinium "a touchy subject." He noted that the recent studies suggested that is advisable to be cautious using the contrast for too many repeat studies. He added that some patients appear to be sensitive to the contrast for reasons that are not yet understood.

At the end of the session, Pierce shared what he would do in the event he or his family needed a gadolinium-enhanced MR exam. "After what I have seen I would have to be convinced I needed it and it was warranted," he told HCB News. "But I would not hesitate to have it done."

According to Pierce, the best thing for health professionals to do is practice caution and keep an ear out for the emerging research that could shed new light on the issue.

"Everyone know gadolinium is useful," he said in summary. "But this is an ever-changing discussion and there is information coming out on a daily basis."