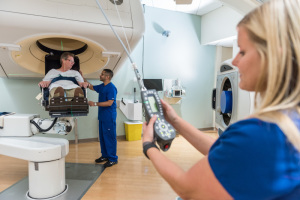 P-Cure's P-ARTIS CT
The Northwestern Medicine Chicago Proton Center will be the first proton center in the U.S. to use P-Cure's new P-ARTIS CT on patients being treated for lung cancer.

P-ARTIS CT — which received FDA approval in September and is available for sale in the U.S. — allows for seated-position CT images for planning proton therapy treatment.

Traditionally, patients lie flat on their backs during CT exams and proton therapy treatment. But positioning them upright is more comfortable for them and can potentially lessen tumor motion.

“This technology is an important addition to our proton offerings,” Dr. William Hartsell, radiation oncologist and medical director at the center, said in a statement. “We expect that imaging lung cancer patients in an upright position will allow us to more precisely target the tumor when we treat it with the proton beam.”

Research has shown that absolute lung volumes are higher in the upright position. Because of that, clinicians may be able to better treat the lung tumor while sparing more of the normal lung tissue, according to Hartsell.

Hartsell and his team will initially use P-ARTIS on patients undergoing treatment for lung cancer, tumors in the middle of the chest and potentially some head and neck cancers.

The imaging system was showcased at the past two ASTRO annual meetings. P-Cure stated that it caught the attention of many radiation oncologists at this year's meeting in Boston, Massachusetts.

"They are excited and are looking forward to seeing the results," Michael Marsh, CEO of P-Cure, told HCB News. "I feel that most of them are just sitting on the fence and waiting. The most visionary just take it, and they will be the leaders."