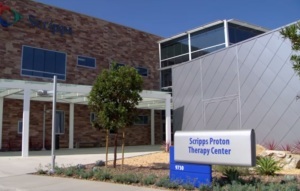 The California Proton Treatment Center opened its doors in San Diego in 2014 and has treated over one thousand patients with proton beam therapy since then.

Now, financial hardship is forcing the facility to file for Chapter 11 bankruptcy protection.

One of the biggest reasons for financial difficulties, he observed, was the move away from using the approach for prostate cancer.

During the restructuring efforts, “our doors will remain open to administer highly-specialized cancer therapies, and a patient ombudsman will ensure that our transition to a new organizational framework won’t affect patients or staff,” restructuring officer Jette Campbell said.

The $220 million center, according to court paper, “has not operated on a profitable or even a break-even basis.” It has five treatment bays and a 90-ton cyclotron.

Although it is run by the Scripps Clinic Medical Group, that organization has no financial stake in the facility. It is owned by an investment group, California Proton Treatment Center, which asked the Delaware bankruptcy court to let it obtain a loan for $16 million to keep the doors open during restructuring.

This month it received the okay for the loan. “CPTC will continue to operate at the very highest quality with the current team of physicians, nurses, medical technicians, and clinical staff,” said Campbell in a statement, adding that, “a patient ombudsman will ensure that our transition to a new organizational framework won’t affect patients or staff.”

The drop in the number of prostate patients led to the need to restructure, according to Dr. Carl Rossi, the Medical Director at the facility, who added that, “We believe this restructuring will enhance our operations and allow us to administer our advanced proton therapy care to a wider spectrum of patients.”

For other patients the advanced therapy has proved lifesaving. Treatments have taken place for 1,167 patients to date, according to Scripps.

“There is no question that this program, and this center, has saved lives, adults and children, that probably had no chance of survival without proton,” Van Gorder told the paper.

Although it appears unlikely that the center can pay off its debt, it does appear to have the cash-flow to cover operating costs, according to Van Gorder.