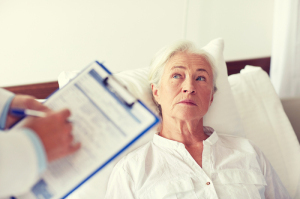 Over half of older women with early stage breast cancer received more radiation therapy than what might be medically necessary, according to a new study based on 2011 data.

The findings were reported in the March 14 issue of the Journal of Oncology Practice.

Greenup and colleagues, including senior author Dr. E. Shelley Hwang, chief of breast surgery at the Duke Cancer Institute, looked at data from the National Cancer Database to find over 43,000 breast cancer patients aged 50 and older who had received radiation therapy. Total cost of the therapy these patients received was about $420.2 million.

These patients were those with small tumors that had not spread to the lymph nodes, and which were excised with lumpectomies.

“Had this group of women been treated with the alternative approaches that evidence suggests are as effective, the cost was estimated at $256.2 million — a potential savings of $164 million,” the study found.

Earlier studies have demonstrated that such patients do “as well” with four weeks as with the more traditional six weeks of radiation, the researchers stated. There has also been a study that showed that those over age 70 saw no significant boost in survival rates from radiation compared with the use of post-op tamoxifen.

The data showed that despite such evidence “57 percent of patients who were potentially eligible to reduce or forgo radiation still received the longer, costlier regimens,” stated the researchers.

Medicare reimbursement data showed that the difference in radiation course was $13,000 vs. $8,000 for six- vs. eight-week regimens. There was no financial data on other insurance.

Breast cancer treatment costs could hit $20 billion in 2020, according to National Cancer Institute statistics, stated Greenup. "Of course high-quality care is the priority in cancer treatment,” she stressed, but noted that use of “evidence-based radiation treatment” could cut costs without “without sacrificing quality."

That said, the decision to shorten radiation regimens should not be decided based only on this study, she and other experts noted, in that the databases used offered no information on why longer courses were given to patients.
1(current)
2