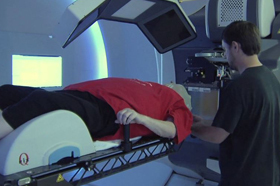 "We've been using this technique at our cancer center for a few years. We believed the therapy was serving patients pretty well," Dr. Jennifer Ho, lead author and a resident in radiation oncology at the University of Texas MD Andersen Cancer Center in Houston, told HCB News. "This retrospective evidence supports the treatment."

The research team conducted a look-back at the medical records of 27 patients who received re-irradiation for thoracic tumors using the IMPT technique through prospective clinical trials at a single institution between 2011 and 2016. All patients had previously received curative thoracic radiotherapy.

The study found that the higher the dose, the lower the reoccurrence or progression of the cancer.

"Our median survival rate of 18 months is the highest I've seen in any studies. I believe the best rates achieved prior were 10 to 14 months," said Ho. "Patient selection is certainly a big factor."

She explained that physicians have to be selective in choosing patients they believe can tolerate the extra treatments. She also said that patients need about 30 months to recover from their initial radiotherapy treatment to have the stamina to be successful with the follow-up IMPT therapy.

Conventionally, patients for whom lung cancer has returned are offered pain and palliative care options, rather than continued treatment.

Lung cancer causes more deaths in the U.S. than any other cancer because it is aggressive and recurrence is common. Many patients are not candidates for surgery, and curative radiation therapy often damages surrounding organs.

"We are really excited going forward, and look forward to refining the treatment to help more patients," said Ho.